The main goal of this European Voluntary Service (EVS) project is to join the long-standing experience of LGL with the ideas of the volunteers in working towards developing the ways and means for increasing the active participation of the LGBT community. This is planned to achieve by increasing their visibility and active participation in democratic decision making processes with a particular focus on youth.

We do believe that this project will be extremely useful for the volunteers as they will be actively involved in the work of LGL and will thus have the opportunity to understand the significance of human rights activism. They will therefore be a part of spreading European values, active citizenship and democratic virtues. Finally yet importantly, volunteering will help them to become future leaders in their home countries. 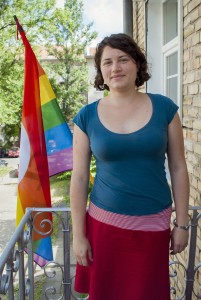 About the volunteer: The European Studies opened a whole new world for me. Not only that I learned a lot about East(-Central) Europe, I also traveled whenever I had the opportunity. It did not need much to convince me of the beauty of this part of the world; I right away fell in love with the first city I ever saw east from Germany: Vilnius. During the past five years I visited many other cities and countries, lived one year in Czech Republic – and still had Vilnius on my mind and in my heart until I eventually returned for an internship. I worked with children, I brought ‘The Young Americans’ for them to Vilnius for music and dance workshops. And when my internship ended after four months I decided to stay in Vilnius. During my internship I had attended a conference on family in the Lithuanian parliament. I was shocked by the anti-LGBT* main speech (held by a German) and I realized that this is an issue I want to get engaged in here. I want to support LGBT* people with their inclusion into society and I would like to make the struggle of LGBT* people in Eastern Europe more visible in Germany. Which fits pretty much my EVS topic: “Volunteering for Visibility and Inclusion”. 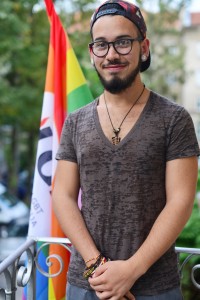 About the volunteer: My involvement with civil society organizations began in the union of students in Italy where I was battling for a better educational system and working on LGBT* students’ rights. After being elected as my school’s ‘representative of students’, I worked on the improvement of the anti-discrimination regulations and and prompting students to work with NGOs. At the same time I became a member of Arcigay, an Italian organization for LGBT* people’s rights. With Arcigay I organized activities for the LGTB* community in my home town Piacenza – for instance I instructed students in different schools about concepts of sexual orientation and gender identity. This year I also worked with Amnesty International on several events and petitions and graduated as a Quantity Surveyor. Furthermore I started travelling around Europe to learn about different societies. Thus I came across the European Voluntary Service and, since I love visiting new countries and meeting new people, I could not turn down the opportunity to contribute to LGL’s initiatives as a volunteer.