The group of the Lithuanian MPs seeks to establish that the criticism of homosexuality and attempts to change one’s sexual orientation would not be qualified as discrimination or harassment on grounds of sexual orientation. The MPs propose to amend the Criminal Code by inserting a provision that “the criticism of sexual behavior or sexual practices, convictions or believes, or persuasion to change this behavior, practices, convictions or believes cannot per se be qualified as harassment, denigration, incitement to hatred, discrimination or incitement to discrimination”.

According to the MPs, they are proposing the above indicated amendment upon the request by the civil society actors in order to establish that “criticisms and remarks on sexual orientation would not be comprehended as discrimination, harassment, incitement to hatred, offence or slander”.

The explanatory memorandum to the proposal states that “the recent years had witnessed an increase in pre-trial investigations under the Article 170 of the Criminal Code on the grounds of any negative comments towards a group of persons or a person belonging thereto.” Under Article 170, a person who publicly incites violence or a physical violent treatment of a group of persons or a person belonging thereto on grounds of, inter alia, sexual orientation, or finances or otherwise supports such activities shall be held criminally liable. According to the MPs, the proposed amendment seeks to defend the constitutional right to hold believes and to express them freely.

Human rights defenders have already expressed their negative attitudes towards this legislative initiative. It has to be emphasizes that under current status of the law no criminal sanctions are imposed for expressing one’s opinions in the form of constructive remarks or comments. The criminal sanctions are applied only for public humiliation, denigration, incitement to discrimination or hatred, incitement to violence or physical violent treatment. Therefore it could be concluded that the proposed amendments has no legal purpose and therefore it is based on homophobic prejudices. The proposed amendment clearly goes against the EU law, the European Convention on Human Rights (ECHR) and the international human rights standards.

It is already the fourth controversial legislative bill in the course of two weeks, allegedly based on homophobic or transphobic prejudices. Previously the Parliament has accepted the bills on “homosexual propaganda”, prohibition of same-sex adoption and explicit prohibition of gender reassignment for the parliamentary deliberation. 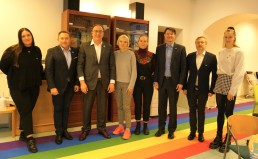