Winter is an especially busy time for human rights activists, with lots of significant days, events and news to be presented to decision makers. This isn’t always easy in Lithuania, but in Belarus, it’s even more difficult, especially in the context of the worsening situation to the East. As Barys Zvoskau Belarusian Human Rights House’s director Anna Gerasimova says, human rights violations in Russia give the impression that it’s “not so bad” in her own country, making it difficult for activists to talk about the problems relevant to them at the international level. 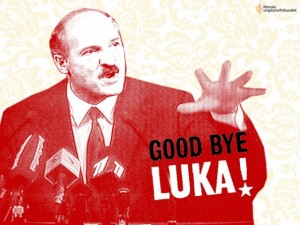 When I was in Minsk, I talked with young LGBT* rights activists who agreed that although the situation in Belarus isn’t good, compared to their neighbours, they can say “Well, at least we’re not in Russia.” Does this argument really help in the field of human rights?

Maybe it helps psychologically… but I’ve always said that Belarus is Russia’s training ground. Mechanisms of repression are tested in Belarus first, and then Russia adopts them, making them even worse for export to the other countries in the region, that follow Russia’s example.

When the events in Ukraine began, the situation in Russia took a turn for the worse, and it no longer looked so bad for Belarus in comparison. This was good for Lukashenko’s administration, as it means they didn’t have to make any real changes. They could just sit back and wait for the understanding that Belarus doesn’t look like such a bad country – after all, it’s not Russia or Azerbaijan.

Unfortunately, the legal system hasn’t changed whatsoever, and because of the repression in neighbouring countries, it’s become more difficult to talk about human rights violations in Belarus.

Have you had to deal with threats from any Belarusian authorities?

Not towards us. What’s interesting is that the Human Rights House is more often mentioned in Russian news as a threat arising from Belarus or Lithuania. It isn’t funny. But on the other hand, the new narrative is starting to present Belarus as slightly more of an opponent of Russia.

In this day and age it’s very simple to follow people, and that’s usually how it goes, especially with well-known people. But, well, there are ways to protect yourself from it.

When you arrive in Minsk, you’ll notice that it’s a very beautiful city, especially in the summer – all the leaves are green, the streets are wide and clean. You feel almost like you’re in a European city. You don’t see any repression, because Belarus isn’t North Korea, when you compare them, it’s a fine country. When people imagine an authoritarian state, they imagine it being dark and bleak, so there’s a real dissonance between what you expect and what you see.

You could say that the situation in Belarus is tolerable, that it’s a safe and stable country. In the former Soviet Union, and especially in Belarus, a lot of films have been made about the Second World War. It seemed like victory was the government’s only achievement, the idea of stability is deeply engrained, so for many years we’ve joked that everything is fine as long as there’s no war. But after the events in Ukraine, these jokes became reality – suddenly stability became a critically important value in the region. People think that, well, at least we’re not at war, Russia hasn’t occupied us, and the like. Although I’m not sure they would be extremely opposed, were that to happen.

Which social groups in Belarus are the most vulnerable?

I don’t think this differs much from one country to another. Roma people really have an unenviable situation – they face the most discrimination of any ethnic minority. LGBT* people also face difficulties – the pro-democracy community and opposition party don’t want to see them at their events. I’d also mention people with HIV.

It’s interesting to take a look specifically at the situation for people dependent on alcohol. I think Belarus is the only former Soviet country that still has work sanitoriums. If you’re an alcoholic, the judge can send you to one of these camps, which, in principle, is almost like a prison. And society is supportive of this practice, because there isn’t any sort of prevention-based policy. Nobody is working on this problem: alcoholism is widely viewed more as a crime than a disease. There’s no way that alcoholics are recovering in these camps, the government is just using them for work.

People with disabilities, though they receive more visibility, still face a severe lack of accessibility, limiting what they can do and what they can’t. Immigrants weren’t viewed negatively for a long time, but Chechens have become targets of discrimination. They try to flee to Poland (where turning them away would violate international requirements) and get stuck in Belarus, where they’re not wanted, even though, as Russian citizens, they have the right to be in the country.

The Belarusian-speaking population is also somewhat discriminated against. A few years ago, the police could freely stop people speaking Belarusian and check their documents under the assumption that they belonged to the opposition. With Russia looking more and more like a threat, Lukashenko changed his position to emphasize that we have our own language, and so on. However, for instance, you can’t receive higher education in this language, you can discrimination in the area of employment, or people won’t understand you in shops. And even though it’s suddenly become fashionable to speak Belarusian, there aren’t many state authorities or officers who speak it.

A lot of international projects financed by European institutions are currently being implemented in Belarus. Should other countries have to contribute to the democratic process in the country?

I think they should, although the initiative has to arise from Belarusians – we need all the help we can get. It’s important to observe what other countries are doing and think about how we can adapt these methods for ourselves. Sometimes it looks like our situation is unique, that no methods seem appropriate, but we really just need time to understand how to use these success stories. When you live in a situation where nothing good is happening, it’s very difficult to move forward, so every positive example helps us.