LGBT events are getting more frequently funded by businesses all around the world. Corporate activism, previously thought of as a risky move, is now becoming an advanced and profitable advertising strategy, as well as an opportunity for businesses to contribute to creating public discourse. By supporting LGBT community activities, companies not only get more publicity, but also show solidarity with their LGBT customers and employees.

In London and New York Pride festivals, this tendency is the most prominent, with many large companies rushing to be among the headline sponsors. Such corporations include “MasterCard”, “Tesco”, “Starbucks”, “T-Mobile”, “Walmart”, “Barclays” and others. Similar tendencies were also seen elsewhere. For example, last year the march in Paris was sponsored by “MasterCard” and “Tinder”, and Pride in Berlin – by “Vodafone”, “Skittles” and other brands.

Active corporate support for LGBT rights is a rather new phenomenon, although one can find some examples from before. For instance, in 2010, airline “SAS” launched a brave advertising campaign, organizing marriage ceremonies of LGBT couples mid-flight. One of the first ads portraying an LGBT couple dates back to 1994 and was created by the Swedish brand “IKEA”. The advert was broadcast in the USA and shows a gay couple searching for a dinner table.

In the last few years, some famous companies have been actively searching for ways to reach the LGBT public in Western countries, especially in June, when LGBT events take place all around the world. Corporations like “H&M”, “Adidas”, “Nike”, and others release special “Pride” collections – clothing and accessories, which incorporate rainbows or other attributes related to LGBT rights. In 2017, the fast food restaurant chain “McDonalds” was one of the main San Francisco Pride sponsors and released a limited edition of rainbow-colored French fries boxes to commemorate the month of LGBT marches. “Apple”, “Google”, “Toyota”, “IBM” and others are also actively contributing to the LGBT human rights cause by producing LGBT-friendly commercials and providing financial and moral support for the community initiatives.

International business corporations are actively supporting LGBT events abroad and producing LGBT-friendly advertisements, but in Lithuania we do not see similar examples of such content nor support. Why? Quite a few international business corporations that also operate in Lithuania are already actively supporting LGBT communities abroad, in countries where LGBT human rights have more public support, and where supporting LGBT human rights will not cause too much damage to the company and inevitably bring them financial gain. However, these companies do not support the same cause in Lithuania (statistics show that Lithuania is one of the most homophobic countries in the European Union) or in other countries where LGBT rights still remain a controversial topic.

Most likely due to the fear of alienating customers who might be against LGBT rights, companies in Lithuania often do not display, or change ads that are openly supporting this cause. For example, last year a “Suitsupply” advertising campaign that showed two men kissing and holding hands did not reach the public in Lithuania. Here, the only pictures used were those with no affection shown between the two men. 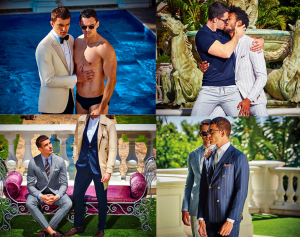 Both here and abroad, the assumption that businesses only care about profit is slowly starting to change. The idea that enterprises should be socially accountable and contribute to the welfare as well as the progress of their respective communities is getting greater support. Especially in Western countries, there are more international and local companies that are putting additional efforts into ensuring their LGBT staff’s equal rights and creating some positive change in their societies.

Business accountability on the topic of human rights is also more often emphasized by international organizations such as the United Nations (UN). In 2017, the Office of the UN High Commissioner for Human Rights issued a set of guidelines for enterprises meant to combat discrimination in the workplace environment on the basis of sexual orientation and gender identity. In the document, companies are encouraged to join the fight against human rights violations in their respective countries.

Positive change related to social responsibility can be seen in Lithuania as well. Last year, tens of dozens of companies signed the Diversity Charter, committing themselves to combat discrimination against employees. Nonetheless, not many international or Lithuanian brands actually dare to openly support initiatives related to LGBT rights, such as the Baltic Pride.

The level of support for the LGBT rights movement in a specific country is also an indicator of how tolerant the general public of that country is. Pro-LGBT advertising campaigns in Lithuania might seem too risky and not profitable for many companies. However, experience of companies in the Western countries shows that business leaders are capable of seeing long-term perspectives and publicly speaking up for what is right. This year there are some LGBT-friendly Lithuanian brands that are contributing to “Baltic Pride” events in Vilnius. Sadly, larger international and local corporations are not following these examples.

Like in the Western countries, with shifts in the public opinion and growing tolerance within the society, corporate support for LGBT rights would also most likely become more popular in Lithuania. However, companies that really want to support human rights and progressive ideas can already be part of positive change, even in an unfavorable environment. As UN High Commissioner for Human Rights Zeid Ra’ad Al Hussein has said when presenting the global standards for business to tackle discrimination against LGBTI people: “Social change requires the active involvement of all parts of society – including, critically, the business community.” 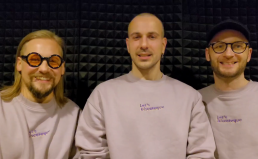 The Roop: Lithuania’s Representatives at the Eurovision Send a Message of Support from Rotterdam