Baltic Pride is an annual LGBT* festival, rotating between Estonia, Latvia and Lithuania.

Since 2009, the main organizers have been Mozaīka (Latvia), the National LGBT Rights Organization LGL (Lithuania), and the Estonian LGBT Association (Estonia).

After 2015, when the parade took place as part of the EuroPride event in Riga and for the first time the pan-European LGBT* rights week came to a post-Soviet state, it is time for VIlnius to take this opportunity again.

The Baltic Pride 2016 is going to take place under the slogan “We are people, not propaganda!”, challenging the discriminatory application of the “Law on the Protection of Minors” that prohibits e.g. publicly promoting same-sex partnerships or advocating for marriage equality. 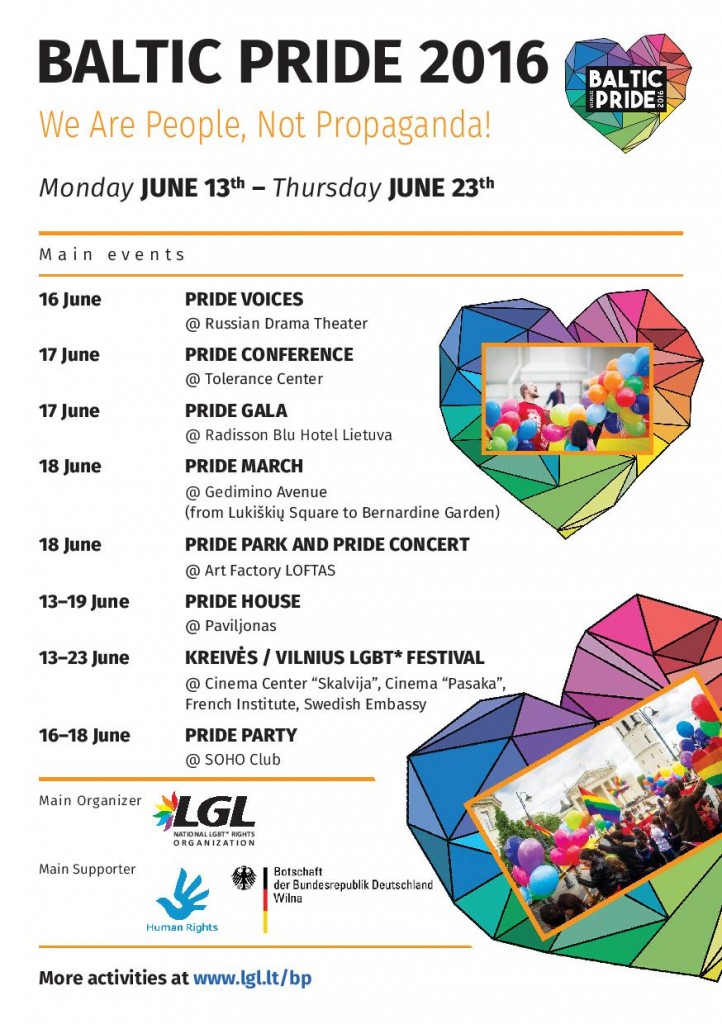 The third Lithuanian edition of the festival will be organized from the 13th to the 23rd of June 2016 and will encompass not only the March for Equality, but also a plethora of cultural, social and community events: on June 16th (Thursday) the theatrical event of Pride Voices will take place, where internationally famous members of LGBT* community will share their personal stories; on June 17th (Friday) the International Human Rights Conference on the topic of legal recognition of same-sex relationships will be organized; from the 13th to the 23rd the queer festival “Kreivės“ will animate the city; and, last but not least, from the entire Pride week a community cultural space, the Pride House, will keep its doors open in Paviljonas Jazz Bar (Pylimo st. 21B), hosting several workshops and events, the Rainbow InfoPoint and an photographic exhibition -witness of the Modern homophobic Russian society.

On June 18th (Saturday), starting from Lukiškės Square, the March for Equality will finally take place on the Gediminas Avenue. The parade will culminate gathering of the LGBT* community in the public park of the Bernardine Garden, located in the historic Old Town of the city. From the meeting point to the end, the march will take place between 12 and 2 PM, and more than a thousand participants are anticipated. The end is not yet the end, because a free bus will give the possibility to the participants to join the Pride Park Concert, hosted in LOFTAS from 4 to 10 PM.