The Lithuanian Parliament is currently deliberating the “Law on the protection of a life in a pre-natal phase” and accompanying legislative projects, otherwise known as the “abortion ban bill”. The Committee on Health Affairs has already approved the bill and those who initiated the law expect it will be passed by the Parliament in spring.

The bill is a dangerous violation of basic women’s rights, blatantly limiting the right to terminate pregnancy in two cases only: if a pregnancy poses an evident threat to life of a mother or if a pregnancy is the result of rape. Even in the latter instance, the victim of a rape has only 12 weeks to prove the rape case and terminate the pregnancy. Also, if approved, the bill would equate women who terminate pregnancies with the murderers of unborn children, and abortion would be considered a criminal act punishable by up to three years in prison.

The number of abortions in Lithuania is constantly and purposefully declining. To continue to decrease the need for abortion, consistent preventative measures such as sex education, affordable and available contraception, and an encouraging social and financial environment must be introduced. However, the guaranteed right to abortion in case of an unwanted pregnancy must remain intact. Women must have access to safe and legal abortions, so that women seeking to terminate pregnancy will not be persecuted and will not risk their lives in search of illegal alternatives.

We invite everyone to join the Lithuanian Citizens’ Initiative for the Right to a Safe and Legal Abortion. Tell the Lithuanian Parliament that women’ bodies belong to women! We ask you to take pictures of yourself or of the members of your organization with pro- choice posters in Lithuanian and to send them to the Embassy of Lithuania in Great Britain. We also ask you to send the pictures to the Initiative’s official page on the Facebook and we’ll post them in a gallery for the cause.

The Lithuanian Citizens’ Initiative for the Right to a Safe and Legal Abortion is also organizing a demonstration to support women’s right to choose. On March 8th, International Women’s Day, we invite everyone who believes that women’ bodies are not state property to join us for informative talks and slam poetry at our rally near the Lithuanian Parliament. We ask those who are abroad and cannot come to Lithuania, to rally near the Lithuanian embassies in Europe to protest against this law. Every voice is appreciated!

In solidarity with Lithuanian women, activists and civil society organizations protesting against abortion prohibition law, The Women’s Global Network for Reproductive Rights (WGNRR) urges Lithuanian Parliamentarians to vote against the proposed Law on the Protection of a Life in a Pre-natal Phase as it infringes on women’s rights.

National LGBT rights organization LGL strongly supports this initiative and the representatives will participate in the aforementioned protest. 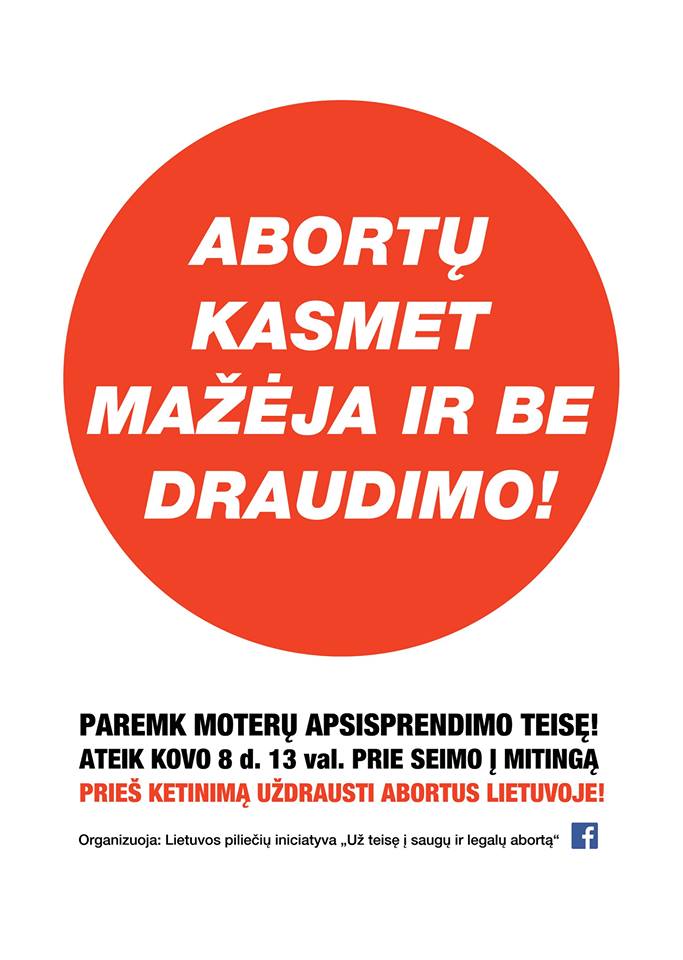