From the 21st until the 28th of November the Latvian Drag King Collective is organizing the Baltic Online Drag King Festival 2020 featuring workshops, discussions and live performances. The Baltic Online Drag King festival aims to invite more people to try the performance art of drag kinging and to educate society about drag and its contribution to the LGBT+ culture. All of the festival’s program will be available to stream live online across the whole Baltic region.

The festival will open with a virtual drag king workshop hosted by UK drag king LoUis CYfer. During the whole week there will be discussions about masculinity, lockdown effects on the queer scene, an open mic night, a lecture on drag king history and an introduction to project writing. The festival will close with the final event of Baltic Drag King Show 2020 where the drag kings will perform their pants off for the crown and the title of Baltic Drag King 2020.

The Latvian Drag King Collective was created for the purpose of organising the first Latvian Drag King festival 2019 in Riga, Latvia. The festival was dedicated to drag king performances (the theatrical exploration and embodiment of masculinity). The mission of the Latvian Drag King Collective is to build a more inclusive society in Latvia, by increasing the visibility of LGBT+ community. It seeks to renegotiate the traditional understanding of masculinity and to expand safe spaces via drag, education and debate. It seeks to lead with unapologetic strength in defiance of the discriminating laws and perceptions found in Latvia. The platform aims to bring together activists and artists from Latvia and the Baltic region to strengthen LGBT+ and feminist activism.

To apply and get more information about the events, go to the Latvian Drag King Collective Facebook page https://www.facebook.com/DragKingLV/ or write to dragkinging.lv@gmail.com. 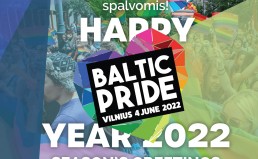