This year marks the 10th anniversary of the Baltic Pride festival in Lithuania. On the occasion of this anniversary, it is interesting to remember how the first LGBT community march, which took place in Vilnius on May 8, 2010, was presented in Lithuanian media.

According to an article by Darja Davydova written for publication “Changing Faces. First March for LGBT Equality in Lithuania”, the first information about organising the Baltic Pride appeared in printed and on-line media in January 2010, when the National LGBT rights organization LGL applied to the Municipality of Vilnius for permission to organise the March for Equality. The majority of the articles on this event consist of news reports which meticulously describe administrative and legal aspects of organising the event, such as the location, security and legal issues concerning the permit. A lot of attention was also given to protests against the march, their planning, goals and realisation. These articles often quoted opinions and comments of politicians and other state representatives, and organisers of the Baltic Pride and the protests. Many articles also informed about international organisations, foreign governments and politicians’ comments on the Baltic Pride and legal initiatives. In the context of the Baltic Pride, many texts also touched upon the topics of human rights, the causes of homosexuality, homophobia and Lithuanian and EU politics concerning sexual minorities.

The Baltic Pride and political events related to it encouraged many political leaders and activists to express their opinion on the LGBT community and the march. They also provided an opportunity for the LGBT community to become visible and audible in the media. Several years ago representatives of sexual minorities were rarely quoted in articles, which were directly related to their lives and concerns, and the attention of the media was more centred on the opinions of individuals fighting against LGBT rights. In the context of Baltic Pride, LGBT citizens and activists promoting LGBT rights were able to challenge the dominant discourse and have more control over their representation. Among the people who were quoted in the articles the most were Baltic Pride organisers Vladimir Simonko, Vytautas Valentinavičius and Eduardas Platovas, and human rights activists Henrikas Mickevičius, Margarita Jankauskaitė, Artūras Rudomanskis, Nida Vasiliauskaitė and Aušrinė Marija Pavilionienė. In their statements these people emphasised the importance of human rights for the Lithuanian society, warned about LGBT discrimination and claimed that LGBT people are no different from other Lithuanian citizens and should have the same rights. On the other hand, political leaders and activists who do not support LGBT rights and the march also had more space to express their opinions, to interpret the Baltic Pride and to create new myths about homosexuality, while human rights activists’ voices were sometimes misinterpreted or derided. 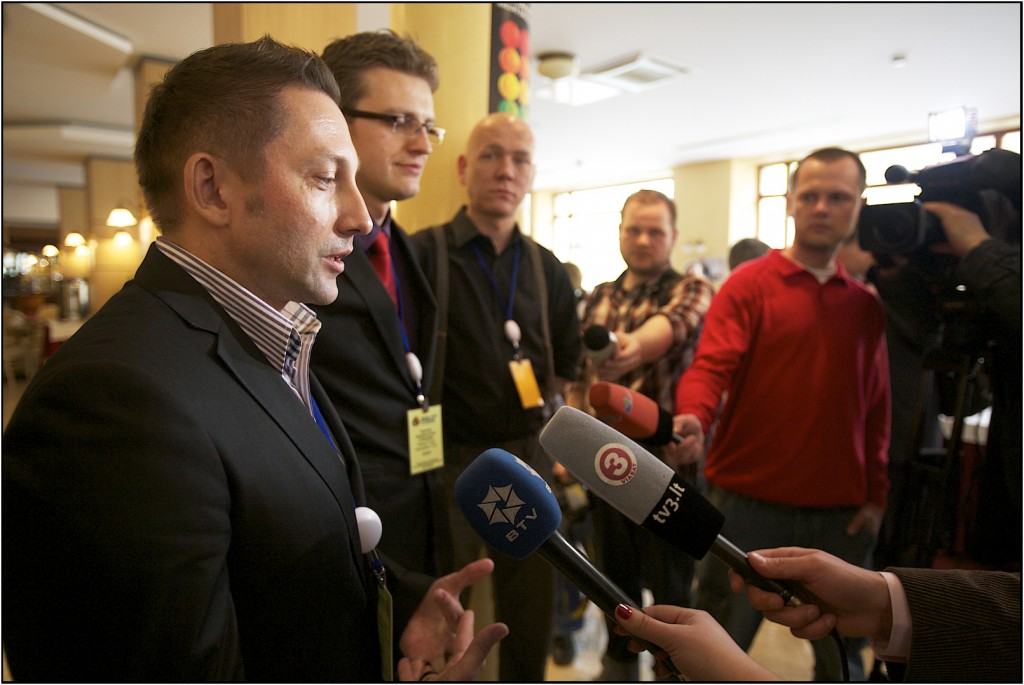 It is important to address the terminology that was used by various activist groups to discuss Baltic Pride events. In order to stress the difference between the Lithuanian event and carnivalesque Gay Pride festivities that are usually organised in other Western countries, the Lithuanian version of the Baltic Pride website used the word “walk” (lt. “eitynės”) to describe the event. Nevertheless, in many news reports and commentaries the March for Equality was called a gay or homosexual parade or march (lt. “gėjų paradas”, “homoseksualų maršas”). This terminology allowed for association of the Lithuanian Gay Pride with a carnival, feast and nudity, and to radically sexualise it. Creating such an image of the march contradicts its main political purpose to remind society about the hardships and discrimination of LGBT people.

It should also be noted that in the discussion on the Baltic Pride ot- her sexual identities – lesbian, bisexual, transgender – were seldom mentioned and the term “LGBT” was used only occasionally. Sexual minorities were often addressed as “gays”, which primarily associated the Baltic Pride with homosexual men. Moreover, the news reports frequently used stereotypical images of homosexual men. Many articles included sexualised images of men or photo- graphs of Gay Pride festivals abroad. One of the reasons for this choice of visual material was the absence of photographs of sexual minorities en masse prior to the Baltic Pride. However, the stereotypical images were not only used in visual material but also in texts. For instance, the headline of an article published before the March for Equality informing that the event would be political and not celebratory said “Gays will refrain from public nudity”. This formulation exemplifies the underlying association of homosexual men with exhibitionism, sexualises them, and constructs them as sexual deviants seeking to divest in public. This article also makes an assumption that public nudity was one of the purposes of the event and was stopped by public outrage. 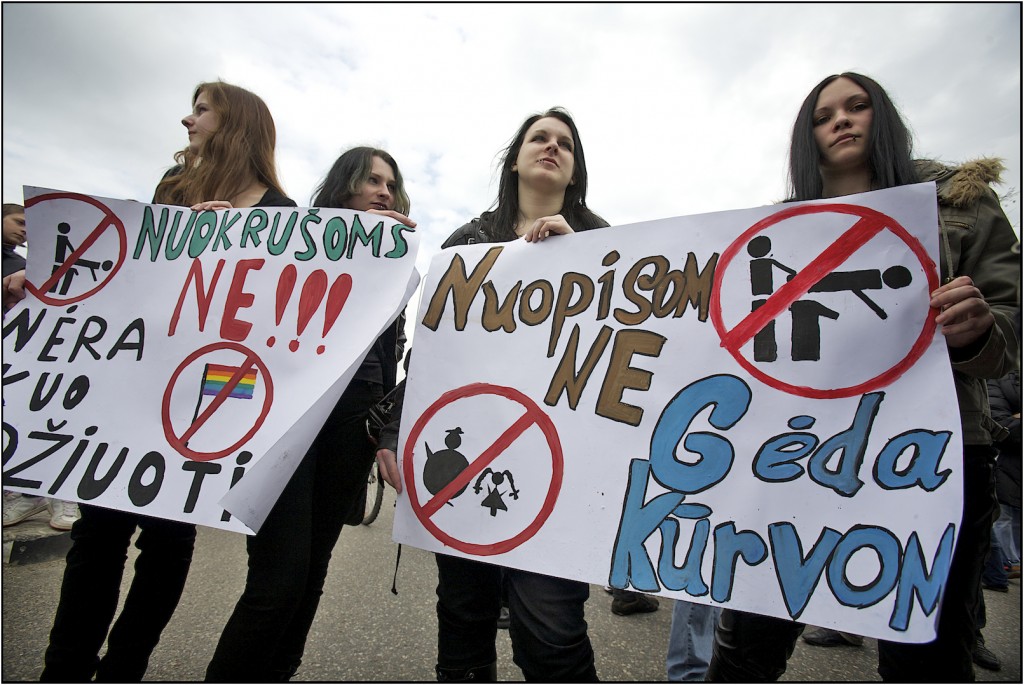 Many texts related to the Baltic Pride included opinions on the march, homosexuality and LGBT activism. In the articles supporting sexual minorities, LGBT people were presented as activists for human rights, freedom of speech and public gathering. Many of these texts opposed the prohibition of “homosexual propaganda” and put this phrase in quotation marks, thus challenging the popular image of LGBT activism as propaganda. These texts also emphasised and elaborated on the purposes of the March for Equality. Some texts mentioned the reason for the march as presented by the organisers: “to provide an opportunity for human rights activists from all over Europe to mobilise and discuss common problems and hardships, to share experiences in fighting discrimination and promoting equality and human rights, as well as to celebrate achievements”.

Even though the original purpose of the march as defined by the organisers was many times mentioned in the media, it was widely debated and interpreted in political commentaries. The authors who supported LGBT activism mentioned that the march seeks to mobilise the LGBT community and to fight inequality, while the opponents of the march claimed that the real purpose of the march was public demonstration, the recruitment of youth into a homosexual lifestyle, and the demand for special privileges. In the discourse with this kind of underlying logic homosexuality is interpreted as a political ideology which relocates the discussion from the context of human rights to the context of moral and ideological indoctrination and in this way legitimises the infringement of free speech. 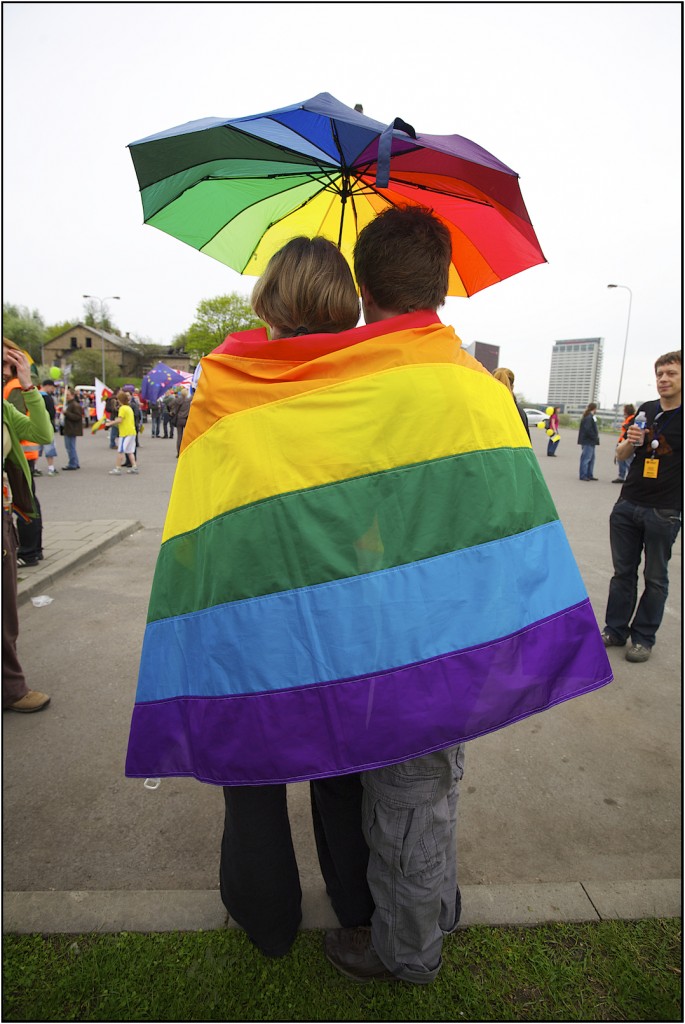 In this type of speech the authors use far-reaching comparisons of homosexuality with radical political ideologies and attempt to evoke fear, anxiety or anger. Some writers even use the term “homofashism”. These comparisons are illogical, ill-grounded and unsupported. This discourse is sensational, seeking to evoke negative feelings, and to cause moral shock in the audience, which would urge society to protect itself from real or imagined enemies. The texts centred on opposition to the March for Equality usually aim to evoke a stream of negative emotions. The feeling of disgust and pity is appealed to by comparison of homosexuality with criminality or disease.

The comparison of sexual minorities with asociality and amorality seeks to evoke the natural negative reaction in the reader who knows little about homosexuality. In such rhetoric the appeal to human rights and tolerance is presented as a lack of common sense, while the Baltic Pride becomes an example of aggression and sexualisation of public space. 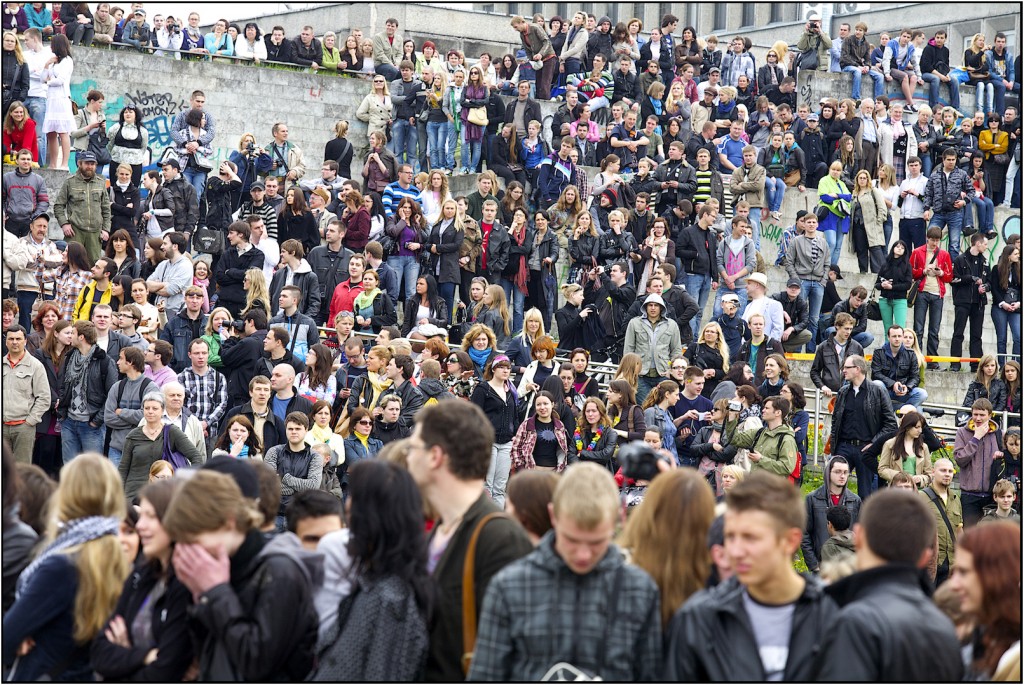 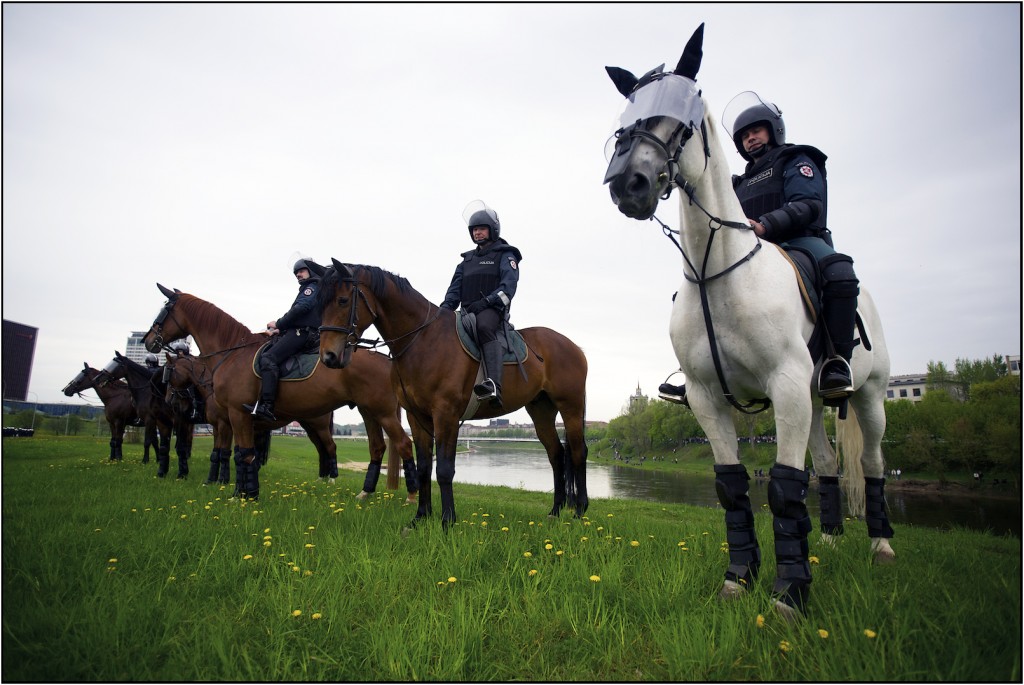 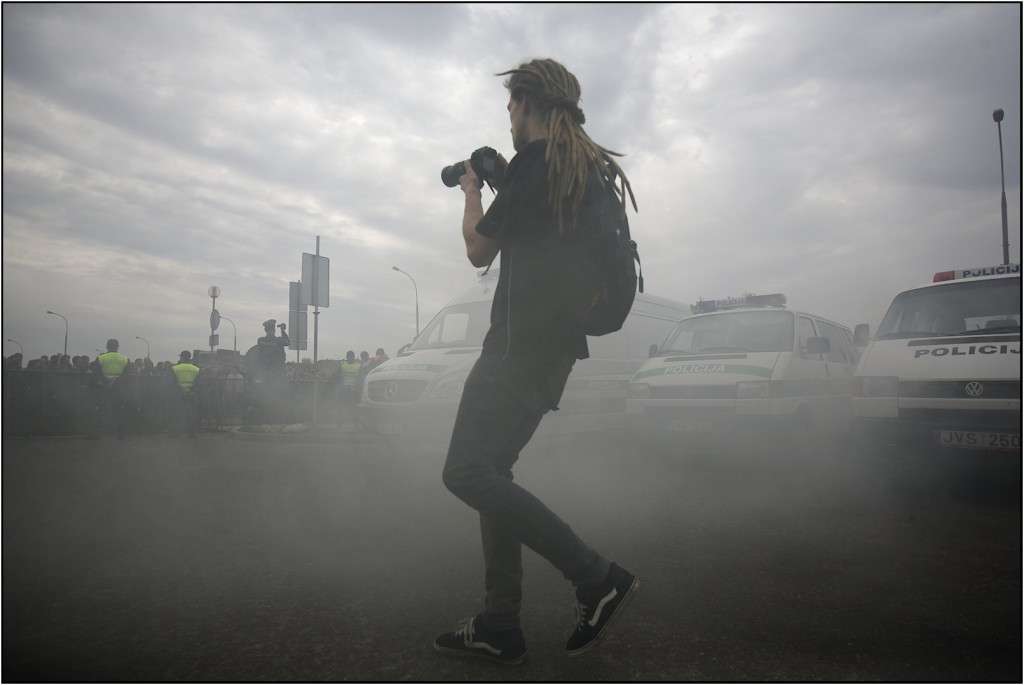 It should also be noted that even though the March for Equality was organised by Lithuanian organisations, it frequently lost its national symbolic component in the public discourse. This lack of national identification can not only be seen in the media, but also in the march itself. The main symbols of the protests against the march were the Lithuanian flag, anthem, slogans and posters with national symbols. The march in turn was primarily associated with transnational identity and represented cosmopolitanism. Right from the beginning of organising the event it was presented as a united Baltic and European Gay Pride rather than a Lithuanian Gay Pride. The symbol of the Baltic Pride portrays the flags of Lithuania, Latvia and Estonia tied together. The cooperation with other EU states was especially important for financial, informational and political support, because the participation of international media and international human rights organisations played an important role in helping to receive the permission for the march and ensuring safety of the participants. As a result, no less than half of the participants were international guests, and the front row of the march was occupied by organisers, ambassadors, representatives of European states and international human rights organisations. Even though the cosmopolitan identity was beneficial for the Lithuanian LGBT community, it helped the opponents of the march to ground their arguments about the “gay lobby” in the EU and to present homosexuality as a phenomenon alien to Lithuania and originating outside of it.

The article was prepared in the framework of the project “Change in Business, Public Sector and Society – New Standards for Reduction of Discrimination”. The project is implemented by the Office of the Equal Opportunities Ombudsperson, partners are the public institution Human Rights Monitoring Institute and LGL Association.