LGBT culture is well-integrated into city life there. An excellent example of this is the Carnival of Brazil, which has taken place in Rio de Janeiro every year since 1641. The event is better known as a samba festival, attracting not only Brazilians, but tourists from all over the world. Rio de Janeiro also hosts a LGBT pride parade each year, which draws thousands of participants. The city receives an especially large influx of LGBT tourists from Latin America, the USA and Europe for New Year’s Eve. The holiday is celebrated there with a special dress code – the streets are decorated in white, and the crowd of residents and guests wears white lilies. The event culminates with a firework show over the ocean.

The neighborhood of Ipanema has become the main attraction for Rio de Janeiro’s LGBT tourists, where they are made to feel especially welcome. “As far as its atmosphere and openness, Ipanema is up to the standard of Europe’s LGBT tourism hot spot Barcelona. The city heat drives the LGBT community to cool off on Rio de Janeiro’s wide, golden beaches. That’s where our community is able to feel like one family – there’s a prevailing feeling of unity in Rio de Janeiro. Every LGBT person can feel free there,” says Vladimir Simonko, LGL’s Executive Director, of his impressions from his holiday in Rio de Janeiro. 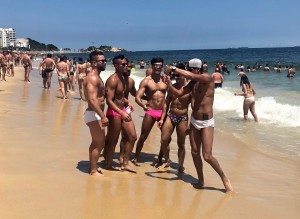 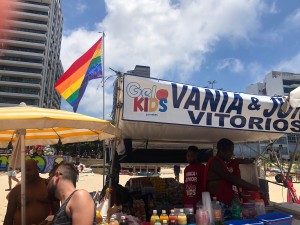 The city is known for its LGBT-friendly beaches, Copacabana and Ipanema, but that doesn’t mean you’ll only find LGBT people there. Straight visitors also have a great time on the beach under the rainbow flags. “It sets a good example of integration of the LGBT community into the city’s infrastructure, not only for the Baltics, but for all of Europe. Rio de Janeiro is also full of LGBT-friendly cafes, bars and restaurants. These are all factors that promote LGBT tourism in Brazil, which benefits the air travel, hospitality and transport sectors,” Simonko says.

“Not every part of the city is safe for tourists, so to save time and money and to stay on the safe side, we often ended up using Uber. What’s interesting is that when you use Uber in Rio de Janeiro, you can travel together with other passengers. We often had to represent our country to people who didn’t know where Lithuania is. But once we rode with an Irish man who worked together with Lithuanians in Dublin, so he actually knew a bit about Lithuania. We got to hear the stories of quite a few LGBT tourists from all over the world during our Uber rides,” he recalls.

Social inequality in Rio de Janeiro is apparent even if you’re a tourist. While it’s not so noticeable in every part of the city, it’s clear that life can be rough for some of the capital’s residents. Favelas are an unignorable part of Rio de Janeiro. Paradoxically, the favelas that have popped up in the hills above the city have the greatest views of the ocean. On the beaches, where everyone can find a place for themselves and feel like part of the community, the city’s pervasive social inequality isn’t quite as apparent.

“The last time I visited Rio de Janeiro before this was eight years ago. Last time, visitors were greeted at the airport and in banks by security guards armed with automatic weapons. My experience in 2019 was nothing like this. I still heard some locals complaining about the fact that even the summer Olympics taking place in Rio de Janeiro didn’t bring the changes in the city’s infrastructure that residents were looking forward to. The city did implement new metro and tram lines for the games, though. And one LGBT gym is still making use of sporting equipment obtained for the Olympics. But there aren’t many signs of the Olympics left in the city center,” Simonko shares.

“If you want to get to know Rio de Janeiro, I would recommend planning your trip in advance, especially looking for a hotel in a neighborhood that’s safe for tourists. A big part of your experience will depend on where in Rio de Janeiro you stay. The safest place in the city for tourists is probably Ipanema. Practically every residential building there has a security system, a fence several meters tall and cameras, as well as security offers stationed outside every building,” Simonko recalls.

Ipanema is a little patch of heaven for LGBT tourists. While Frank Sinatra brought fame to that name when he covered “The Girl from Ipanema”, the neighborhood currently thrives on LGBT tourists’ money. “I would even compare Rio de Janeiro’s LGBT-friendly beaches to the ones in Barcelona. However, Brazilian resorts aren’t cheap. I also wouldn’t recommend it for the gourmet – the local food was nothing impressive, except for fresh mangos and papayas, but refreshing caipirinhas, piña coladas and cold light local beer made up for it. You know, when it’s 30 degrees, you want something to cool you off more than you want something to eat. It’s also not easy to find a free seat on the beach for New Year’s Eve in the sea of tourists. And we were surprised by the size of the waves. When we set up close to the ocean, we got splashed and had to pull our things out of the water pretty often,” he remembers fondly. 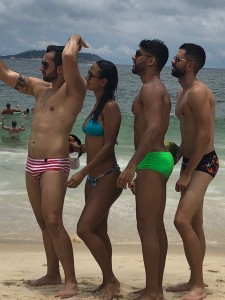 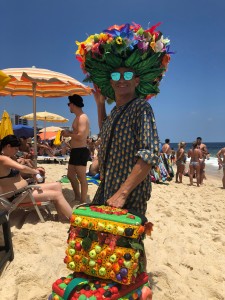 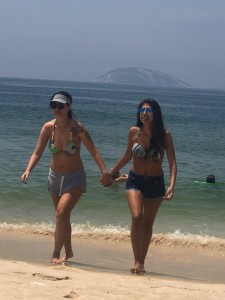