“It all happened around midnight,” recalls a witness who was in one of the LGBT* venues, club Burlesque, on on the night from Friday to Saturday when the events took place. “I came to the club with a friend. Altogether, there were around 15 people in the club. We sat down at the bar, ordered a drink and started chatting. At first we didn’t even realise that the men in masks behind the bar were not part of the show programme”.

It wasn’t long before club goers heard screams and were told to put their hands on the bar. The masked officers didn’t bother answering clubgoers’ questions of whether they had been arrested or how long they were going to be detained. According to witnesses, there were about a dozen special unit OMON officers and a group of people suspected to be plain-clothes officers.

“They took our names, although they didn’t check our passports, search us, or use any other form of force or intimidation. We could not use our phones, but overall, I’d say they acted reasonable. It seemed that their main business was with the bar administration, they were mainly interested in the cash register, papers and alcohol,” a visitor to club Burlesque recounted to the news site Salidarnasc. The raid lasted approximately an hour and a half, during which no one was allowed to leave the premises.

On Sunday it became clear that two bars, both known as venues popular among the local LGBT community, were raided in Minsk over the weekend. The same law enforcement officers and OMON special forces unit, after club Burlesque, appeared at LGBT* club Casta Diva at about 2:00 in the morning. During the raid at Casta Diva, witnesses say that several people were detained and taken away to an unknown location. The reasons for their detention were also not announced. Before leaving the premises, law enforcement agents recorded the personal information of the approximately 80 people who were in the club at the time. 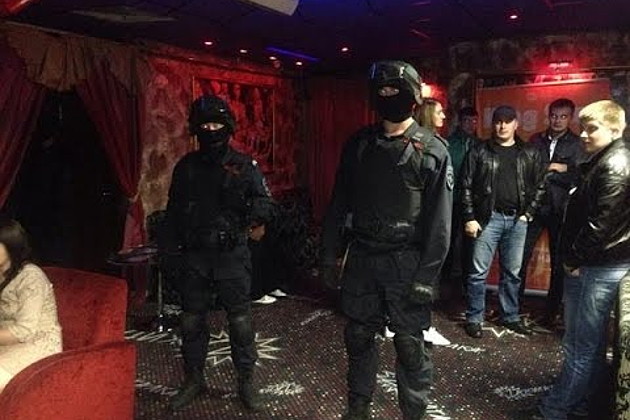 On Monday, the news portal tut.by announced that raids in two clubs in Minsk had been carried out by the drug and alcohol control agencies. Reports say that as a result of the raid in Burlesque, law enforcement confiscated illegal alcohol. Police also confirmed that several people from Casta Diva were taken to the precinct, where their identification documents were checked, after which they were released.

LGBT* human rights activists worry that these raids may signal the beginning of renewed pressure on the local LGBT* community. Earlier this year, in May, a news story about a raid at a private LGBT party appeared on social media, reporting that attendees’ personal information was recorded and a few were arrested, though few details of the incident emerged.  Similar raids were frequent occurrences in 2013, when over the course of January and February alone, 8 such incidents were reported to have taken place in LGBT* community venues in Minsk and Vitebsk. It was also reported that during 2012 and 2013, a number of LGBT* activists were subjected to a series of police raids, during which law enforcement would raid their homes, record personal information and use other intimidation techniques. After prolonged pressure from law enforcement authorities, two prominent LGBT* human rights activists were forced to flee Belarus and seek political asylum in Sweden.

The coordinator of the civic initiative “Journalists for Tolerance”, Aleh Rozhkov, calls such behaviour by law enforcement discriminatory, and recalls the LGBT* club “6A” being forced to shut down after systematic raids a few years ago. Without more detailed information, it is difficult to speculate on why the raids are happening now. It could also be a reflection of Belarusian society’s generally negative attitudes towards LGBT* people.

Human rights expert Andrei Paluda, suspects that these actions by law enforcement may not be exclusively targeted toward the LGBT* community. He says “The state tries to control every citizen. They are unsettled by groups of people who are well-organized, who are ready to show solidarity.” The expert believes that once communities demonstrate an ability to self-organize, no matter who they are or what they do, they get into trouble.

The situation is further complicated by the reluctance of victims of law enforcement to come forward, either for fear of repercussions, or anonymity. The gathering of personal information has LGBT* club visitors worried, to say the least, that this information may be used against them. Could this be disclosed to their families, places of work, or educational institutions?

The director of LGBT Center DOTYK Ana Loktionova added that LGBT rights groups are concerned with the events, but remain united in their efforts to provide any support necessary “The positive side to what happened is the consolidated response from the human rights activists community, that were able to react to the raids and offer psychological or legal counseling to those in need”.

These actions by law enforcement authorities are especially alarming in light of the current human rights crisis sweeping the LGBT* communities of Chechnya, Azerbaijan and Tajikistan, where reports have emerged of not just arrests, but torture and even murder.