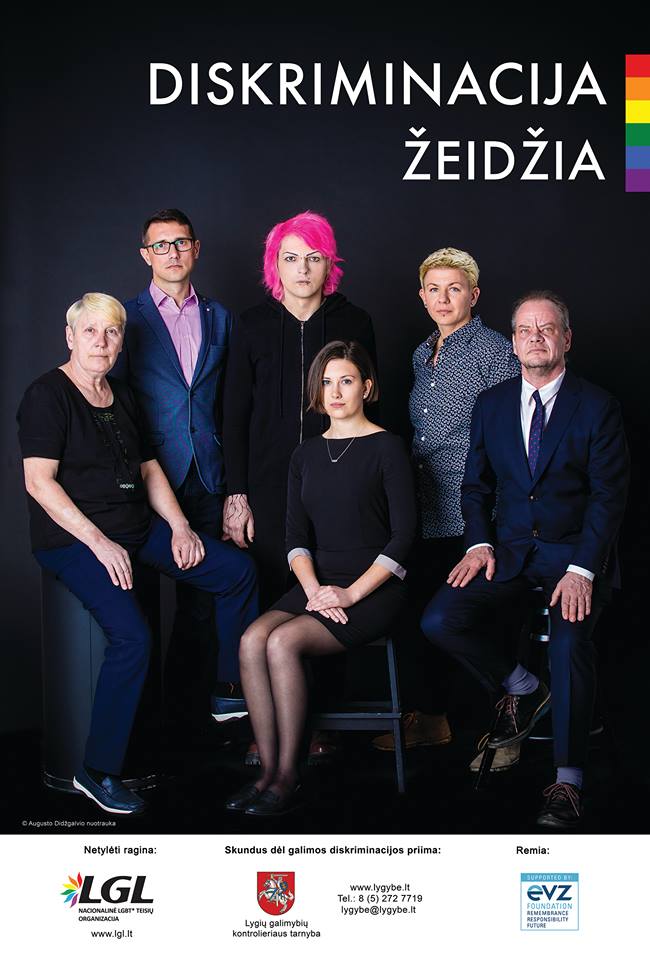 On May 9, the Rainbow Days 2017 billboard campaign has been displayed in the public places of Vilnius, capital of Lithuania. The campaign is organized by the National LGBT* rights organization LGL, in attempt to draw attention to discrimination against LGBT* people and encourage LGBT* people to speak up when faced with discrimination.

Posters with a slogan “Discrimination Hurts”, displayed in the public transport pavilions are encouraging people to report any cases of discrimination to the Office of Equal Opportunities Ombudsperson of the Republic of Lithuania.

The Rainbow Days 2017 posters include a photograph of the members of the local LGBT* community members of varying ages, genders and identities. The author of the photographs is Augustas Didžgalvis.

MAY 9th: DISCUSSION ON PARTNERSHIP LAW

DISCUSSION ON PARTNERSHIP LAW IN LITHUANIA

The National LGBT* rights organization LGL, together with Vilnius Univerity’s Institute of International Relations and Political Science (VU TSPMI) and a member of the Lithuanian Parliament Viktorija Čmilytė-Nielsen, invites you to a discussion on the possibilities to legislate partnership institute in Lithuania.

The institute of partnership is important not only to same-sex couples, but also for not married different-sex couples. Even though the right to register a partnership was established in the Civil Code since 2001, there is still no legislation regulating these partnerships. Why Lithuanian politicians are reluctant to take the final step, even though the majority (84 %) of country citizens are in favor of partnerships between women and men? Or are we still not ready to give legal status to same-sex couples? What steps must be taken to reach a broader consensus in the society on this question?

The institute of partnership in Lithuania – is it only a moral (value) issue? Or is it a practical way to solve both different-sex and same-sex couples problems?

Participants of the discussion:

Discussion moderator – journalist from news portal DELFI.lt Mindaugas Jackevičius. The number of participants is increasing – invitations to the discussion were also sent to the member of other political parties and civil society organizations.

On March 12, 2017 the National LGBT* rights organization LGL together with foreign diplomatic missions in Lithuania is organizing a festive Rainbow Days 2017 event at the Vilnius Town Hall to commemorate the International Day against Homophobia and Transphobia (IDAHOT).

During the Rainbow Days 2017 festive event, persons distinguished for their contributions to LGBT* rights movement in Lithuania will be awarded. The guests of the event will be rewarded with the performances from the French drag queen LaDiva Live and Lithuanian singer Ruslanas Kirilkinas.

On March 12, 2017 between 04.00 and 11.00 P.M., in celebration of the International Day against Homophobia and Transphobia (IDAHOT), the pillars of the Vilnius Town Hall will be lit with a rainbow colored flag. The initiative aims to demonstrate that Vilnius is an open and tolerant European city.

SOCIAL CAMPAIGN “RAINBOW BUS”: PROTEST NEXT TO THE EMBASSY OF THE RUSSIAN FEDERATION

In order to draw the attention to the persecution and serious human rights violations against LGBT* people in Chechnya (Russian Federation), the National LGBT* rights organization LGL is organizing a protest next to the Embassy of the Russian Federation in Vilnius (Lithuania). To demonstrate solidarity with homosexual persons who were terrorized by the Chechen leader Ramzan Kadyrov, we will roll out the 30 meters long rainbow flag. We hope that this move will encourage people responsible for shaping Lithuanian foreign policy to not be indifferent regarding the human rights violations perpetrated to the East of our country borders.

Everyone willing to support the cause are welcome to join the protest on May 13, 2017 (Saturday) at 12:00 P. M. next to the Russian Embassy (Latvių str. 53). The spectacular rainbow flag will arrive together with the Rainbow Bus filled with colors, music and human rights activists whose travels through Vilnius streets will bring joy both to the residents and guests of the city. If you want to travel to the protest with the Rainbow Bus, register by e-mail diana@gay.lt until May 10.

The protest will be held from 12:00 to 12:30 P. M. next to the Embassy of the Russian Federation. The participants of the protest will be invited to join the further travel of the Rainbow Bus (as long as we will have empty seats). After the protest by the Embassy of the Russian Federation, the Rainbow Bus will travel to the Parliament of the Republic of Lithuania, where the 30 meters long rainbow flag will be rolled out again. This way, we will express our concern regarding the initiatives in the Parliament aiming to restrict the fundamental rights of LGBT* people. The Rainbow Bus tour will end at the Gediminas Hill where we will roll out the 30 meters long rainbow flag once more. We hope to show to the residents and guests of the city that Vilnius is an open and tolerant European city. Positive energy and good mood is guaranteed!

WHERE: Embassy of the Russian Federation, Latvių str. 53, Vilnius

It is going to be better than Christmas, New Year’s and Your birthday combined together! The most notable event of the “Rainbow Day’s” 2017 festival – it is Eurovision party with drag queens LaDiva Live (France) and Okeanide (Lithuania). Witty comments, Eurovision Drinking Game and live performance of Eurovision hits – all of this and even more is waiting for you on May 13th (Saturday) in Jazz Bar Paviljonas. Let‘s celebrate diversity together!

Evening program includes:
» free (!!!) glass of sparkling wine for the first 50 guests;
» live broadcast of the grand final of the Eurovision Song Contest on a big screen at Paviljonas (starts at 10 PM);
» witty comments by the host of the evening Okeanide on the fashion choices by the Eurovision performers;
» “Eurovision Drinking Game” during the final voting; we are going to distribute more than 40 free shots among the most passionate fans in the audience;
» live performance by the drag queen LaDiva Live, featuring the best songs of Eurovision Song Contest and much more (starts at 2 AM);
» party till the morning with with Filomino DJ’s and Nuclear Princess Radio.

You can purchase advance tickets (EUR 5) either in our office (Pylimo Str. 21, Vilnius) or at our online store: http://www.lgl.lt/shop/product/eurovision-party-tickets.

Tickets will be sold at the event location by the door as well (EUR 6).

By purchasing a ticket to “Rainbow Days 2017” Eurovision party you support the activities of the National LGBT* Rights Organization LGL. Event is organized by the association LGL with the support by the French Cultural Institute.

What is LGBT*? What to make of it? Do they demand special rights? Celebrating the International Day Against Homophobia, Transphobia and Biphobia (IDAHOT), the National LGBT* rights organization LGL and the Office of Equal Opportunities Ombudsperson of the Republic of Lithuania invites you to the Rainbow Days 2017 Quizes in Vilnius, Kaunas and Klaipėda. Who are the “famous” LGBT* people? What is the history of the LGBT* human rights movement? What is the legal reality of LGBT* people? What about LGBT* music and films? You will learn all the answers to these and other questions at the Rainbow Days 2017 Quizes.

Why the rainbow flag – the symbol of the LGBT* movement – has six and not eight colors? Where was the poet Sapho born? Which European country was the first to allow same-sex marriages? If you think that these questions are too easy – register your team (maximum 7 people) by e-mail diana@gay.lt and we will be waiting for you at the Rainbow Days 2017 Quiz in Klaipėda! The winning team will receive special Rainbow Days prizes! If you were late to register your team – do not worry, you will be able to register your team at the location starting 30 minutes before the event. We compiled the Rainbow Days 2017 Quiz questions with the help of the quiz guru Ugnius Antanavičius, who earned his fame for the mind bending skills together with the team “Gagarin on the Moon”.

The Rainbow Days 2017 Quiz is a reminder that the LGBT* movement not only fights legal, social and cultural battles, but also fosters a community with a vivid and colorful history and culture. We are very happy that we will be joined by Agneta Skardžiuvienė, the Equal Opportunities Ombudsperson, and the representatives of the Office of Equal Opportunities Ombudsperson to celebrate the IDAHOT day. We will start the event with a light talk about why it is important to support LGBT* community and its members, even if you do not see yourself as a part of it. We will be joined by Mintautė Jurkutė and Eglė Urbonaitė Tilindienė from the Office of Equal Opportunities Ombudsperson, who will discuss what we can all do to combat negative attitudes against LGBT* people in Lithuania.

The Rainbow Days LGBT* Quizes are a part of the Rainbow Days 2017 festival organized by the National LGBT* organization LGL. You can find the full event list here. The event is supported by Stiftung EVZ Foundation (Germany).