On Saturday the 10th of May, the 2015 European IDAHOT Forum celebrating International Day Against Homophobia, Transphobia and Biphobia (IDAHOT) took place in Montenegro. The representatives of the national LGBT* rights organization LGL participated to the event and were presented together with the other international LGBT* organizations attending the event, the ILGA-Europe’s 2015 review of the rights of LGBTI persons, Rainbow Map 2015.

In this review, as every year, it was presented the situation of the rights related to the LGBTI persons in 49 European countries. The review takes into consideration the development of LGBTI rights according to parameters related to the specialties of each country such as the legal framework, the right to equality and non-discrimination in marriage and partnership rights, the right to apply for asylum, the legal recognition of gender reassignment, the respect of the right of assembly, association and expression and the measures taken at Institutional level in order to prevent hate speech and discrimination of LGBTI people on the basis of sexual orientation and gender identity.

The LGBT* rights map is drawn up annually, taking into account major changes in the law. Five-top steps of the podium in terms of advancement of LGBTI rights were taken by the United Kingdom, Belgium, Malta, Sweden and Croatia. Baltic Sisters Latvia and Estonia ranked respectively 36th and 24th in Rainbow Map 2015. In 2013, Lithuania ranked 31st in the map, 33rd in 2014 and 35th in 2015.

The situation for LGBTI people is consistently deteriorating in Lithuania. “In the path towards equality, in the last years, many countries achieved historic victories while, on the contrary, some remained stuck in the same place. All the countries presented in the first positions in the Rainbow Map 2015, are united by a sharp improvement in terms of the leadership of their politicians and their government representatives; this clearly helps human rights activists’ work even when circumstances are hostile. Unfortunately, the situation of LGBTI rights in Lithuania is deteriorating, this time for the third year in a row. This is a sad result not only in the context of the European Union countries, but also in relation to our neighboring states in Eastern Europe. We must take concrete sanctions immediately, because it seems that is unlikely that we can fall even below this stage “- commented the Executive Director of LGL, Vladimir Simonko. “We hope for that in 2015 Lithuania will follow the good examples of Estonia and Malta. Now, more than ever, Lithuania requires political leaders who, together with LGBT* people and the organizations representing their rights, will actively work for the advancement of LGBT* rights”- stressed the head of the association of LGL.

In addition, the national LGBT* rights organization LGL recalls that in the evaluation of the rights of LGBT* people in Europe, the organization ILGA-Europe focused in particular on the legal basis of each country as a parameter for the analysis. The association LGL draws attention to the fact that legal framework of each country is surely extremely important, but certainly not the only aspect required to be taken into account for the analysis LGBT* people rights. Among other things, it must be taken into consideration also how the countries’ laws are applied in practice, what is the overall atmosphere lingering inside society, which is the extent to which discrimination in everyday life is experienced by LGBT* persons.

Here is the media release issued by ILGA-Europe regarding the Rainbow Map 2015:

Leadership: the key to unlocking LGBTI equality in Europe

Launched in Montenegro, at the 2015 European IDAHOT Forum celebrating International Day Against Homophobia, Transphobia and Biphobia (17 May), the 2015 Rainbow Europe package highlights the complexity of the current situation for LGBTI people in Europe.

“We witnessed several countries making historic strides, while others have stalled in terms of their equality development.” commented Paulo Côrte-Real, Co-Chair of ILGA-Europe’s Executive Board. “The vital ingredient, present in so many of the countries who have climbed in our Rainbow Map rankings, was unshakable leadership from political figures and activist leaders, often in challenging contexts.”

Malta’s rise to 3rd in our rating is undoubtedly the most eye-catching story of the 2015 Rainbow Map. This is an improvement of 8 places (11th in 2014) with an overall score of 77% (57% in 2014). These numbers only tell part of the Maltese story – the substantial legislative and constitutional progress over the past 12 months was the platform for this climb into the Map’s top 3.

At the other end of the spectrum, the difficulties faced by LGBTI activists in Azerbaijan are clear; it lies at the bottom of the 2015 Map with only 5%. Our colour-coded representation of the current legal and policy situation for LGBTI people in Europe ranks 49 countries according to our ultimate benchmark of 100% equality. The fact that no European country has yet reached this magic number, and that the European average is lingering at just 42%, tells European decision makers that there is much work to be done in the coming months.

The Map’s fluid rankings are complemented by a detailed country-by-country analysis in the fourth edition of our Annual Review. It looks at the changes, both the positive advances and negative trends, that happened at national level in the 12 months from 1 January 2014 to 31 December 2014 and several compelling themes have emerged.

The recognition of the human rights of trans and intersex people came to the fore in a major way in 2014. Great steps forward came in the shape of Denmark’s progressive legal gender recognition law and through impressive standard setting, when Malta gave gender identity constitutional protection from discrimination. The Spanish region of Andalucía adopted similar provisions to the Danish model and The Netherlands removed previous legal gender recognition requirements for a court order, surgery, and permanent sterilisation.

The sheer visibility of LGBTI advocates in public life was very encouraging. From the openly gay mayoral candidates elected in Poland and Turkey to Latvia’s foreign minister Edgars Rinkēvičs coming out on Twitter and Conchita Wurst’s success at Eurovision 2014 – all have become symbols of the growing prominence of LGBTI people and their allies across Europe.

Family and marriage equality rights advanced at pace with future marriage equality approved in Finland, enacted in England, Wales and Scotland, and to be decided in an Irish referendum in a few days’ time. Estonia became the first former USSR country to officially recognise same sex unions by passing an historic cohabitation act.  Progress was not universal though; vocal campaigns for restrictive marriage definitions emerged in Slovakia and the Former Yugoslav Republic of Macedonia.

Opposition to LGBTI rights also consolidated in 2014 in the form of anti-equality rhetoric – from anti-‘gender theory’ campaigns or in anti-‘Western messaging’ spread by Eurasian Union leaders which spread far beyond those countries’ borders.

ILGA-Europe Executive Director Evelyne Paradis remarked: “The advances made in 2014, and in 2015 so far, do not just belong to ILGA-Europe. Our Map reflects them and we have supported them. But ultimately, they belong to the activists, to our member organisations and the political leaders who are willing to raise their head above the parapet and lead social change.”

“As we approach the 10th anniversary of the Yogyakarta Principles and the 20th anniversary of ILGA-Europe in 2016, we have many hurdles left to overcome.” said Joyce Hamilton, Co-Chair of ILGA-Europe’s Executive Board. “Homophobic and transphobic violence, hate speech and discrimination continue to be an everyday occurrence for some of our LGBTI neighbours.  Let’s hope that 2015 will bring more examples similar to Malta and Estonia. Now more than ever, Europe needs political leaders to work with and for LGBTI people in Europe.” 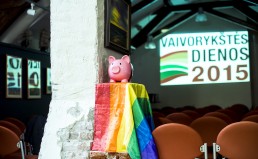