Lithuania, along with Latvia, Poland, Romania, Bulgaria and Slovakia to this day remaining the only European Union Member States without same-sex family rights recognition.

Although these countries face multitude of social and political issues which often effectively demotes LGBTIQ equality  to political periphery, LGBTIQ communities and their supporters are becoming more vocal than ever before. 2021 showered European LGBTIQ community with variety of developments: from the most negative, such as anti-LGBTI law enforcement in Hungary to LGBTIQ family rights recognition milestones set by the Court of Justice of the European Union.

Lithuanian LGBTIQ community received a huge blow in May, 2021, after the initial efforts to pass the highly anticipated Partnership law fell flat.  Despite already being highly compromised in terms of suggested protection for the unmarried couples and seemingly adapted to fit within the margins of the domineering „traditional“ narrative, gender neutral Partnership proposal failed during its first reading at the Lithuanian Parliament, only a few votes short.

Nevertheless, gender-neutral partnership continued to receive an unprecedented support from a variety of private and public actors of the Lithuanian society in 2021. Several studies on same-sex family rights were released by human rights organizations.  Leading inclusive businesses issued a support statement for Partnership regulation, psychologists, prominent academics and mothers of LGBTIQ children urged the decision makers to recognize same-sex relationships. It created a bold contrast to anti-gender and  anti-LGBTI campaigns. 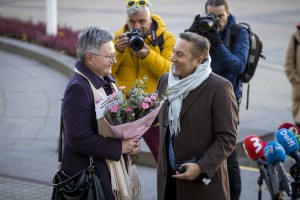 On the other hand, many LGBTIQ families in Europe who are compelled to survive in a considerably disadvantageous socio-legal environments often turn to strategic litigation.

The European Court of Justice in its landmark ruling of December 14, 2021 said same-sex parents and their children should be recognized as a family in all EU member states. This concerns rainbow families in cross-border situations where child whose same-sex parents are not recognized by existing regulation could be at risk of becoming stateless.

R.I.S.E. project research led by LGL documented similar cases not only in Bulgaria, where aforementioned Baby Sara’s case originated, but also in Poland, where same-sex parents initiated several proceedings against local authorities in order to acquire identity documentation for their child.

In Lithuania, however, a significant portion of LGBTIQ couples have already concluded marriage abroad, although current by-laws do not provide an option to change civil status or family names on such basis in the local registry.

Positive developments have been recorded in neighbouring Latvia: on December 10th, the Senate of the Republic of Latvia annulled the judgment of the Administrative Regional Court that rejected the applicants’ application for legal recognition of same-sex families. The Senate found that the Administrative Regional Court falsely concluded that the legal protection of same-sex families is a political decision. The Constitutional Court already acknowledged that the first sentence in Article 110 in the Constitution  of the Republic of Latvia places an obligation upon the legislator to ensure legal protection of such families, which also includes the obligation to ensure a possibility to legally strengthen such relations and be recognized as a family.

On the 29th of September the first ever high-level conference on same-sex family rights recognition in Lithuania was organized under the auspices of the Ministry of Justice led by Evelina Dobrovolska who herself has an elaborate experience in human rights and was among the initiators of the gender-neutral Partnership proposal.

Commissioner Helena Dalli, During her opening remark at the conference, stated that in 2022 the Commission  “will propose a horizontal legislative initiative on the mutual recognition of parenthood between member states, that is, the recognition in one member state of the parenthood attributed in another member state.”

“2021 was year full of massive political and societal contrasts in Lithuania, but now we have three parties in Seimas that expressly included Partnership regulation in their electoral political agenda, this continue to nourish the hope that political resolution finally be found to reduce the existing inequality of LGBTIQ people”, Vadimir Simonko executive director of  LGL says. 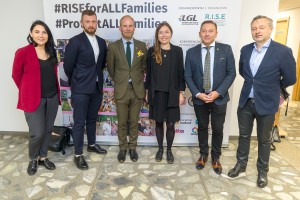 R.I.S.E.  project consortium representatives at the Ministry of Justice

“I would like to thank all R.I.S.E. project Positive Role Model Campaign participants because they have shown the raw reality what is like to be an LGBTI family in Lithuania, Latvia, Poland, Bulgaria, Romania and Slovakia. And this reality calls for real changes”, Vladimir Simonko concluded.

Prepared as a part of the project “Raising awareness for Inclusive Societies to Embrace rainbow families in Europe (R.I.S.E.) which is implemented with the financial support of the Rights, Equality and Citizenship (REC) Programme of the European Union.

Baltic Pride 2022 Festival Starts on 31st of May in Vilnius