Hundreds of anti-gay protesters, many of them fascist and religious extremist descended upon Lithuania’s second-ever Baltic Pride parade in Vilnius, where they pelted attendees with eggs and verbal abuse. Among them was Petras Grazulis, an anti-gay lawmaker who rallied protesters with a bullhorn. Protesters also threw eggs, hitting Lithuanian lawmaker Giedre Purvaneckiene and Sweden’s European Union Affairs Minister Birgitta Ohlsson, who were standing at the front of the parade along with other dignitaries. “It shows that we need to march until eggs aren’t thrown anymore and people can march freely and without fear,” said Purvaneckiene, who was not injured

The IGLYO board and secretariat held our board meeting in Vilnius this week, as well as participating in an international human rights conference, facilitating a workshop and marching with Baltic Pride. IGLYO is disappointed that the organisers of Baltic Pride March for Equality, LGL, had been challenged several times in court by Vilnius City authorities on the location of the Baltic Pride March for Equality. IGLYO would like to praise the constant work by LGL to ensure that LGBTQ people would be able to march on the main city avenue, and have their human right to assembly respected and affirmed. Roh Petas stated: ‘IGLYO is delighted to see the presence of so many LGBTQ young people at this years Baltic Pride. It’s empowering to see people taking a stand for their human rights and against bigotry and discrimination. We stand with LGL and all LGBTQ youth and students in the Baltic’s as they continue to fight for their basic human rights.’

Baltic Pride: Pro-LGBT Politicians Threatened, Pelted With Eggs. It was only the second Pride parade ever and that kind of groundbreaking comes with danger.

A tremendous police presence guarded LGBT supporters in Lithuania — including via helicopter and horseback — from the threats of neo-Nazis and other fundamentalists. The Associated Press reports one police officer was injured. Sweden’s European Union Affairs Minister, Birgitta Ohlsson, was one of those hit with eggs while standing at the front of the Baltic Pride parade. She told Sweden’s The Local that a few hit her in the head. She gave a speech from a stage that the Associated Press reports was stormed by 50 protesters that police stopped.

Around 600 people marched for LGBT Pride through the streets of Vilnius today. It was only the second time the event, known as March for Equality, had taken place in the country. They were met by hundreds of protesters, 50 of whom were held off by police when they tried to storm the stage where activists were speaking. Amnesty International Denmark tweeted: “A lot of of angry protesters showed up to shout and throw bottles and eggs, but the Baltic Pride was still a big success.”

Amnesty International congratulates the Lithuanian LGBTI community on the Baltic Pride held in Vilnius today. According to the organizers around 1000 participants marched in central Vilnius. “It is a great day for human rights in Lithuania, as so many LGBTI activists demonstrated freely today and where supported by many bystanders”, said Dr Nicolas Beger, director of Amnesty International’s European Institutions Office.

VILNIUS, Lithuania — A group of protesters tried to disrupt Lithuania’s second gay pride parade ever on Saturday, defying an enormous police presence by throwing eggs at marchers and attempting to storm a stage. Several hundred gay rights activists took to the grand main street of Vilnius to show their pride, waving Lithuanian and rainbow-colored flags, with some standing on top of buses decked out in colorful balloons. Many feel the unrest in Lithuania, which is currently heading the EU’s rotating presidency, is particularly troubling since the Baltic state, along with neighbors Latvia and Estonia, continues to discriminate against gays and lesbians despite having undergone intense political and economic integration with Western Europe over the past two decades.

A group of protesters tried to disrupt Lithuania’s second gay pride parade ever on Saturday, defying an enormous police presence by throwing eggs at marchers and attempting to storm a stage. Several hundred gay rights activists took to the grand main street of Vilnius to show their pride, waving Lithuanian and rainbow-colored flags, with some standing on top of buses decked out in colorful balloons.

Ohlsson, the Minister for European Union Affairs, was targeted along with several other politicians at the event in Vilnius. Protesters attempted to disrupt the parade, which was attended by hundreds, by throwing eggs and attempting to storm the stage.
“Yes, it was definitely drama. Eggs were thrown at us and some hit me in the head and my body. It was a hateful atmosphere and I saw neo-Nazis and religious fundamentalists screaming hateful rhetoric.”
The parade, which was dubbed the “March for Equality”, is only the second ever gay pride event held in Lithuania which is a largely Catholic country.

Yesterday the Baltic Pride took place in Vilnius and marched on the city’s main avenue despite the mayor’s repeated attempts to seal it off in a distant street. Despite minor incidents, the Pride was much less controversial than its first version in 2010.
Several Members of the European Parliament, including Ulrike Lunacek, Sophie in ‘t Veld, Cecilia Wikström and Leonidas Donskis, took part in the week-end’s programme. Lithuania continues to hold the rotating presidency of the Council of the European Union for another five months, before Greece takes over in January.

LGBT and human rights in Lithuania took a significant step forward in the Baltic nations, and in Lithuania, during the March for Equality on Gediminas Avenue in central Vilnius on 27 July 2013.

Despite 28 being detained in minor incidents during the events, LGBT rights of millions were acknowledged by many as being basic human rights of the European Union, and worldwide. Brigitta Ohlsson: “No government has the right to tell the citizens who to love, no which identity to choose. We are marching for freedom, and equality, and we are marching for a Europe that will never, ever, accept homophobia ruling our streets. We are also marching for those who cannot: I am thinking of our friends in Russia who are facing violence every day. The new anti-gay bill in Russia is a shame for our society. I am here because human rights are my pride.”  Stuart Milk: “If you are an LGBT organisation, from Vilnius to Damascus, you are never alone. The world is with you, and in time we will look back on this and say “we are history, and we made it happen.” Equality will be everywhere, and for everyone. We are all human, nothing human is alien, and we will have a celebration that is louder than any voices of diminishment”

I find gay prides too loud, too freaky, too camp, to use some prejudicial vocabulary. But this is not what Baltic Pride, taking place in Lithuania on 27 July 2013, is about. While homosexual couples in Germany are hoping to receive the same tax benefits as heterosexual couples, while gay marriage is being introduced in France in England, Lithuania is at the same level as Russia or Senegal. As almost everywhere else in Eastern Europe, homophobia is rampant from pubs to parliament, from churches to universities, from old to young. The Lithuanian parliament only deals with homosexuality in the context of laws criminalising “homosexual propaganda”. Gediminas Avenue in the heart of Lithuania’s capital Vilnius is guarded by so many police officers, cars and horses that there can’t be a single police officer left anywhere in Lithuania. The reason for the police presence are protests and violence which have been threatened against the parade. But the organisation both by the Lithuanian Gay League and by the police is perfect and is clearly and successfully geared towards de-escalation. I still felt like at a zoo then, but the other way round: you might think that you’ll go to a gay parade to see extraordinary, zany and somewhat “different” people, but then you see the most absurd and outrageous people among those standing outside of the parade and vociferously protesting against it. Among the thousands who don’t participate in the march but who prefer to observe the spectacle from the sidewalk , those who are neutrally curious are in the majority. Many also visibly express their support by waving, clapping, thumbs up. I dare to make the prognosis that many more people will march in the next Baltic Pride.

Lithuanian Jewish community supports the “Baltic Pride 2013” march, as well the community advocates for human rights, tolerance and is against homophobia, discrimination and racial hatred.

A crowd of protesters threw eggs and charged onto a stage at Lithuania’s second annual gay Pride Parade July 27, reports the Associated Press. Several hundred gay marchers in Vilnius were met with almost as many protesters, including Lithuanian politician Petras Grazulis. Grazulis, and 27 other anti-gay activists, were arrested. Flying eggs hit pro-gay Lithuanian politician Giedre Purvaneckiene and Swedish European Union Affairs Minister Birgitta Ohlsson, neither of whom were injured.  “It shows that we need to march until eggs aren’t thrown anymore and people can march freely and without fear,” Purvaneckiene said.

28 people were detained during the event. 400-500 people attended the march, meanwhile, the police counted about 1,200 people.As reported, the gay pride parade in 2010, according to Kestutis Lancinskas, Chief of Vilnius County Police Headquarters, cost approximately LTL 170,000-180,000 (EUR 49,000-52,000).According to Lancinskas, this year’s gay pride march was much smoother compared to that in 2010. 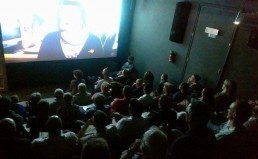 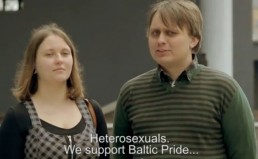 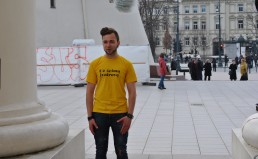