International nongovernmental organization Amnesty International has condemned a decision by Vilnius authorities to ban a gay march through the Lithuanian capital’s central Gedimino Avenue, and pledged to continue pressure on the country’s government.

Following a meeting at Vilnius Municipality earlier in the day, she said that the March for Equality, planned for July 27, is being organized to demand equal rights. In her words, signatures will be collected for the march to take place. 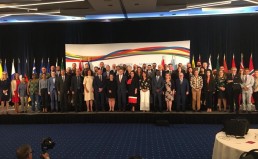