On September 7th, 2017 representatives of the National LGBT* rights organization LGL attended a meeting with their partners in the project “Rainbow Rights: Promoting LGBTI Equality in Europe” in Helsinki. During the meeting, the activists discussed future project activities.

At the meeting, the implementing organizations also made decisions on project events in the near future, as well as sharing suggestions to increase the project’s visibility and discussing communication and other administrative issues. Participants were also introduced to two new team members, Johanna Laaja and Tikli Oikarinen.

The next meeting will take place on October 23rd in Vilnius, where LGL is organizing regional conference as part of the “Rainbow Rights” project.

The Project Rainbow Rights is supported by the Rights, Equality and Citizenship (REC) Programme of the European Union. 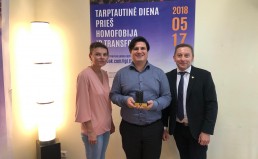 LGL Gave an Award to Representative of Barclays