The news from Chechnya, where gay and bi-sexual men are being tortured in concentration camps, have made many world leaders react strongly. Chancellor of Germany Angela Merkel has protested to Russian president Vladimir Putin and more leaders of the free world have also mouthed their protest. But where does the Icelandic government stand in this matter? We contacted the minister of Foreign Affairs, Guðlaugur Þór Þórðarson, and asked what the government is going to do regarding these persecutions.

“It is really saddening for me, as most other people, to see such persecutions and severe violations of human rights,” says Guðlaugur Þór Þórðarson, Minister of Forreign Affairs.

“The Icelandic government is deeply concerned about these news from Chechnya. We have always fought for the rights of the queer community abroad and thought that, despite different obstacles, we have made great progress in the last years towards increased rights for the LGBT+ community. So these news are a hard blow and show us that there is still lots to be done.”

“To be honest the news from Chechnya are so horrible that one has a hard time beilieving that such things can be happening in our times,” says Guðlaugur. “And, yes, it reminds one of the concentration camps in WWII and the Russian gulag. The international community can not tolerate such violations of human rights. To make matters even worse those who rule in Chechnya are not willing to admit to doing anything wrong and seem not to care about the reactions these news have gotten.”

“In my mind it is important that the men being held captive will be released as soon as possible and the people responsible for these actions will be held accountable.”

The Icelandic Ministry of Foreign Affairs has condemned violations of human rights openly in the international community before, what does it plan to do in this case?

“Of course we condemn these violations of human rights and voice our concerns along with others that have demanded that these matters will be examined and investigated and have asked the Russian government to take responsibility for these actions and put an end to these horrors in Chechnya.”

Does the minister plan to meet the Russian Ambassador in Iceland or other prominent Russian figures to discuss these matters?

“I was recently in Russia and discussed human rights, including the rights of LGBT+ people, with the Russian Minister of Foreign Affairs, Sergei Lavrov. I will continue to voice those matters when opportunity presents itself. Iceland will also continue to fight for the rights of the LGBT+ people internationally. As sad as it sounds it’s a fact that in more than seventy-five countries  homosexuality is still considered a crime. That has to change and we will fight for that happening along with other nations that agree with us on that. People should not be discriminated against because of their sexual orientation. Human rights are universal and should be granted to everyone.” 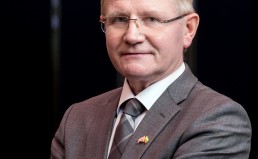