Open letter to the attention of:
Mr Šedbaras, chairman of the Committee of Legal Affairs,
Lithuanian Parliament
by email and by fax
Brussels, August 21, 2009
Dear Mr Šedbaras,
We are writing to you on behalf of the European Parliament’s Intergroup on Lesbian and Gay Rights and ILGA-Europe, the European Region of the International Lesbian, Gay, Bisexual, Trans and Intersex Association (ILGA) to express our grave concerns regarding the Amendment to the Criminal Code XIP-668(2) and the Amendment to the Administrative Code XIP-667(2) which aim to criminalise ‘propagation of homosexual relations’.
These amendments, if adopted, are not only a severe limitation of freedom of speech, but also a  breach of the very fundamental principles of equality and non-discrimination of the European Union and the Council of Europe. Article 21 of the Charter of Fundamental Rights of the European Union prohibits any form of discrimination, including on the grounds of sexual orientation. Article 13 of the Treaty of Amsterdam bans ‘all forms of discrimination on the grounds of gender, race or ethnic background, religion or creed, disability and sexual orientation’. The European Court of Human Rights on a number of occasions confirmed that sexual orientation discrimination is clearly in breach of the European Convention on Human Rights.
In 2006, a meeting of 29 human rights experts from 25 countries developed a set of international legal principles on the application of international law to human rights violations based on sexual orientation and gender identity to bring greater clarity and coherence to States’ human rights obligations. These are known as The Yogyakarta Principles.
While all human rights apply to lesbian, gay, bisexual and transgender
(LGBT) people, some are of particular importance. Freedom of expression is essential for LGBT people to argue in favour of ending discrimination in the content and application of the law.
Freedom of information is necessary both to obtain information from others about how to organise and campaign for equality, as well as medical and sociological information to enable people to protect themselves. Freedom of Association and Assembly are necessary for LGBT people to form organisations that work for self-help and equality, including through public manifestations, such as pride marches.
The proposed amendments by Lithuanian legislators to criminalise “promotion of homosexual relations in public places” will clearly violate the enjoyment of these human rights and will severely restrict the right of NGOs to organise peaceful public events.
For discrimination (i.e. a difference in treatment) to be permitted by law, it has to be based on “reasonable and objective criteria”. What such criteria might cover is still evolving under international human rights law, which is a living instrument that is constantly being developed by judicial bodies. Courts have repeatedly stated that where sexual orientation is in issue, there is a need for particularly convincing and weighty reasons to justify a difference in treatment.
Michael Cashman MEP
President of the Intergroup on Gay and Lesbian Rights
Sophie In´t Veld MEP
Vice-President of the Intergroup
Martin K.I. Christensen, Co-Chair, ILGA-Europe Executive Board 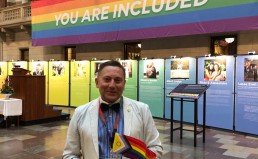 LGL representatives participated in the WorldPride and EuroGames festival in Copenhagen