Well-known and openly gay Lithuanian singer Ruslanas Kirilkinas became a victim of a homophobic attack. Kirilkinas was performing at a concert held in the Lithuanian town of Aukštadvaris on the 23rd of February when eggs were thrown at him from the audience, resulting in lip, chin and ear wounds. The singer was taken to hospital by ambulance and his injuries were treated.
Based on video footage of the concert, the attacker was reportedly identified as a biker familiar to the police and who has been involved in organising anti-gay protests in connection with Baltic Pride with homophobic members of parliament Petras Gražulis and Kazimieras Uoka.
The singer Kirilkinas has reached fame through participating in various television singing contests and semi-finals for the Lithuanian Eurovision candidate. 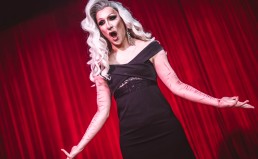