On January 27, 1945, Auschwitz-Birkenau, the largest Nazi death camp, was liberated by Soviet troops. This is why January 27 is International Holocaust Remembrance Day. Jews, Sinti and Roma (“Gypsies”), mentally and physically disabled people, Jehovah’s Witnesses, anti-socials (like homeless people, prostitutes), and many other groups were imprisoned and murdered.

The first part of the workshop was about the development of this paragraph: How it was established after the German Empire was founded in 1871, changed, how the ‘Golden 20s’ brought liberation, the first Institure of Sexual Research worldwide, the term ‘transsexualism’, how paragraph 175 was almost removed in 1929 – and eventually tightened after Hitler came to power.

Also during the National Socialism neither lesbians nor trangender people were included in that paragraph which is why it is much harder to reconstruct their cases. Lesbians were arrested for other reasons – as women had no power in society the Nazis did not see any necessity for a separated treatment. There is no material available about transgender people. But as it was only in 1923 that a term had been found for them it can be assumed that they were treated as homosexuals or anti-socials.

Very soon homosexuals were brought to concentration camps – after imprisonment, custody and acquittal for safety reasons, as preventive detention. In the concentration camps they could be spotted by their pink triangels. They were among the most punished groups, worked in quarries, had to undergo surgical experiments, castration, sterilization for ‘race hygiene’, got glands with testosteron.

And although the treatment was ended in 1945, paragraph 175 persisted in different forms and time periods in both in the Federal Republic of Germany (West Germany) and the German Democratic Republic (East Germany), it got fully removed only in 1994 and it took until 2002 to the rehabilitation of persecuted homosexuals.

These basic information were important but nevertheless hard to grasp. Therefore the participants divided into smaller groups and read excerpts from “The Man with the Pink Triangle. The true, life-and-death story of homosexuals in the Nazi death camps” by Heinz Heger, a moving auto-biography from a survivor. The sharing round after the reading was full of silence. 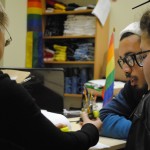 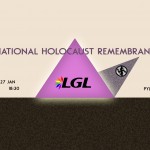 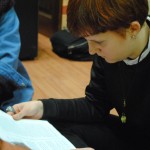 LGL is carrying out the 10 months project ‘Volunteering for Visibility and Inclusion’ under the Erasmus+ programme EVS (European Voluntary Service).