From the 15th to the 21st of June, EuroPride historically took place in Riga. I am speaking of history due to the unique and singular characterization of the event: EuroPride took place in a post-Soviet country for the first time. This marked a break in the wall, which was done in a peaceful and colorful way, with lot of smiles. During that time, the Latvian capital-city enjoyed a dynamic and positive atmosphere with the so many initiatives that the EuroPride hosts (the organization LGBT and their Friends Mozaika) scheduled for the event. Among these, there was a wide range of themed-exhibitions, workshops, conferences, film screenings, concerts, lectures.

I took part to EuroPride activities from the 18th onwards. The day of my arrival in Riga, I took part in an exciting lecture on intersex-talented people, which represented a unique opportunity to learn more on one of the most invisible group inside the wide LGBT* spectrum. In the context of the charming Pride House (venue of many lectures and workshops during Pride days), the workshop was organized and led by Esben Esther Pirelli Benestad, family therapist, specialist in clinical sexology, professor of sexology at University of Agder (Norway) and author of the study “Gender Emotions”.

In the same day, the National LGBT* Organization contributed to make the agenda even more engaging, by organizing a discussion and a movie screening around the happenings of Baltic Pride 2013, which, at that time, took place in Vilnius (Lithuania). The movie, “We Can Be Gay Today”, was realized by French Director François Message and Sound Engineer Nathalie Sibille, who together with LGL’s Board Chair Elena Dapkūnaitė and LGL’s Executive Director Vladimir Simonko, took part to the discussion moderated by LGL’s member Tomas Ilja. The group remembered the most moving moments during the realization of the movie and dived into the behind-the-scenes and the most impactful events of the Baltic Pride 2013 in Vilnius. The event was attended by more than fifty people and among the audience it was possible to spot many protagonists appearing in the movie itself, such as the members of the US rock group Betty and many of the volunteers and LGL’s staff members who helped in the realization of the event. It was definitely like watching a movie inside another movie!

The next day, I attended the international conference “Freedom of Speech and Assembly: A World Perspective In A Narrative”, organized by MOZAIKA. Goal of the conference was to raise awareness of human rights issues in the European Union and beyond, with a focus also on Latvia, since the country this year was at the Presidency of the Council of the European Union. Global representatives from the LGBT* field and not, shared their perspectives and experiences on activism and freedom of speech and assembly in their countries. Particularly impressive were the words of Stuart Milk, who celebrated in a moving speech the incredible step forward that the LGBT* movement achieved from the death of his uncle Harvey. With his “you can kill the messenger, you can’t kill the message”, all the Conference exploded in a loud round of applauses.

On the 20th, the main event of the agenda finally happened: the Pride march! The march, which aimed at empowering LGBT* people and giving them visibility. The parade however did not draw attention to the problems occurring to LGBT* people exclusively in Latvia and in the Baltics, but also focused on post-Soviet countries and other places in the world where LGBT rights are still at critical risk. The attendance to the event was impressive: more than 5’000 people marched and thus exceeded the organizers’ initial predictions of only 2’000 people participating to the event. Starting point of the march was Vērmanes Park, in the heart of Riga. Around 13:30 a peaceful, a colorful and joyful procession begun to march around the streets of the Latvian capital-city for more than 2.3 km, four times more than it happened during the previous Baltic Pride in Riga. The parade was heavily policed and the organizers of EuroPride did an incredible work to ensure the maximum level of safety for demonstrators. Despite some homophobic posters and few protestors who burned a rainbow flag and threw a couple of eggs to the demonstrators, the parade proceeded smoothly and successfully.

LGL organized a trip from Vilnius to the Latvian capital, giving to more than fifty activists from Lithuania the possibility to participate to the Pride Parade and march alongside its team. LGL’s group stood out from the parade for the bright colors of the posters, t-shirts, flags of its demonstrators, thus capturing and catalyzing the full attention of media and photographers. Plus, thanks to the help of volunteers, LGL’s stand was one of the most visited one among those in Vērmanes Park. Many donations for t-shirts, bags and pins were given by participants to the event in support of the organization for Baltic Pride 2016, in Vilnius.

What is my conclusive thought on EuroPride? I think all the activists attending the event really made the change necessary to make the history so claimed by the EuroPride slogans. And they made myself very proud of attending that historical moment too. 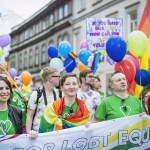 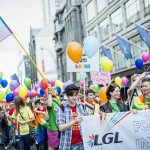 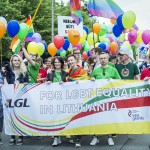 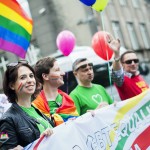 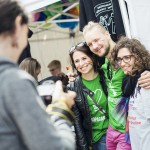 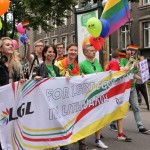