On the 17th of May, almost all major EU institutions marked Sunday’s International Day Against Homophobia, Transphobia and Biphobia (IDAHOT). The European Parliament, the European Commission and the European External Action Service all issued statements on this occasion.

The High Representative of the European Union, issued a written statement on behalf of the EU, affirming the EU’s commitment to refuse discrimination on any grounds.

“On this International Day against Homophobia, Transphobia and Biphobia, the EU stands together with LGBTI people all around the world in the struggle to end discrimination on the grounds of sexual orientation and gender identity. All human beings are equal in dignity and all are entitled to enjoy their rights as enshrined in the Universal Declaration of Human Rights.

[…] the EU will continue to advocate measures to combat discrimination and violence against LGBTI persons, and to actively promote their rights.”

May 17th represents an especially important day, as exactly 25 years passed since the World Health Organization (WHO) removed homosexuality from its list of mental illnesses. The day has been commemorated throughout the world since 2004, and in Lithuania since 2007, when the National LGBT* Organisation LGL organised Rainbow Days for the first time.

This year, Rainbow Days events did not take place in the last days only in Vilnius, but are coming soon also in Kaunas and Klaipėda as well (19th-20th of May). Rainbow Days’agenda for 2015 had so far featured discussions, film screenings, community events and public campaigns, all of which aimed to draw the public’s attention to the social exclusion experienced by the Lithuanian LGBT* community. 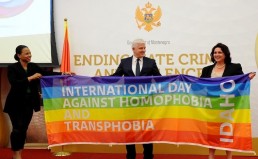