On April 3rd, 2015, volunteers of the national LGBT* rights organization LGL sent out the publication, “Homophobic Bullying in Lithuanian Schools: Survey Results and Recommendations” to schools and educational institutions throughout the country. 250 Lithuanian schools, all of the pedagogical psychological service providers working in Lithuania, higher learning institutions training educators and social workers, the Ministry of Education and Science of the Republic of Lithuania, the Committee on Education, Science and Culture of the Parliament of the Republic of Lithuania, the Lithuanian School Students’ Union and the Lithuanian Pupil’s Parliament will all be receiving this publication about homophobic and biphobic bullying in Lithuanian schools.

LGL’s publication, “Homophobic Bullying in Lithuanian Schools: Survey Results and Recommendations,” which was released in March, 2015, constitutes the first step in trying to solve the problem of homophobic and biphobic bullying in our country. The main purposes of this publication are to shed light on these forms of bullying and to spread information to Lithuanian schools, teachers and other specialists working with children. It is important to note that LGBT* topics are not included in the curriculum used to train future teachers in Lithuania. Additionally, bullying on the basis of sexual orientation is not included in the in the bullying prevention programs of educational institutions. So how effective can responses to homophobic bullying be, if the problem itself is not understood?

According to a survey conducted by LGL, only one-tenth of teachers reported recognizing the problem of homophobic bullying in their schools, and over half of respondents stated that this type of bullying does not exist in their schools, so there is no need to address the issue. Over half of the teachers surveyed believe that it is not appropriate to discuss sexual orientation in school. “I was moved by both the stories of the students who participated in the study and the indifference expressed by many of the teachers. Such attitudes prevent a large portion of homosexual and bisexual students from feeling safe in school; they don’t feel that they have the right to report the bullying they’ve experienced or to speak freely about their sexual orientation,” remarked Kendra, a volunteer at LGL.

The national LGBT* rights organization LGL hopes that the publication will reach its intended recipients, fortify Lithuanian educational institutions and their libraries, contribute to bullying prevention, and provide the information needed end to violence in learning environments. LGL emphasizes that the needs of homosexual and bisexual youth are the same as those of their peers: they want to feel safe, to not be discriminated against for being who they are, and to have the right to achieve their educational goals. If even one teacher changes their response to homophobic bullying, the entire atmosphere of a school can improve. 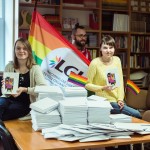 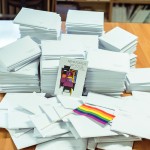 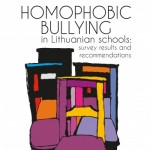 This publication is a part of the project “C.O.D.E: Coming out for Diversity and Equality” which is funded by the European Union program PROGRESS.