In the past two weeks Lithuania witnessed two hate crimes said to have been driven by homophobia. On June 24th an explosive device was thrown at singer Ruslanas Kirilkinas during his performance in Linksmakalnis village and on July 7th Agness Landau posted a status on her Facebook wall about the violence her friend had experienced – two attackers beat him up and burned his face.

When Ruslanas Kirilinas, who is open about his homosexuality, started his concert in Linksmakalnis, a petard was launched at him. Luckily, it missed him and he was not harmed. Even though he did not contact the police, an investigation was started by the Kaunas Police Department.

According to the head specialist of the Communication section of the Police department Kęstutis Kasciukevičius the investigation was started because the petard was launched at a person. The attacker is already known. When the police officers arrived at the location of the concert, the foreman gave them the information about the citizen who interrupted the festivity. However, it ist still unknown if he will be fined.

This was not the first violent attack against the singer. In February 2013 during a concert eggs were thrown at him, reulting in bruizing of his face. The incident is still being investigated.

LGL does not have any more information about the trans artists Agness Landau publicized attack against her friend. It is only known that there were two attackers and before attacking they used hate speech.

LGL association would like to remind you that most hate crimes, among wich are many attacks against LGBT* people and allies, are left unreported, their true motives are not evaluated and attackers often remain unpunished. We urge you to report such hate crimes you were a victim of or witnessed to Law enforcement officers or to fill out the nacional LGBT rights LGL anonymous crime report form. 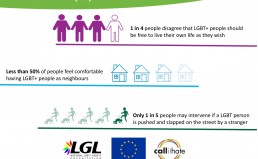