To make the very best out of this unexpected gift to our organization, i.e. the national LGBT* rights association LGL, we are opening a public auction to sell this custom made boot-cut jeans! The money raised will go to support the work for equality and LGBT* rights in the Lithuania. Based on the contributions, the LGL will sponsor a special award to a person, who has actively contributed in promoting LGBT* rights in Lithuania in 2013. The auction, symbolically, will be closed on the International Human Rights Day on 10 December 2013.

Are you going to be the next owner of this fashionable, yet practical pair of jeans? 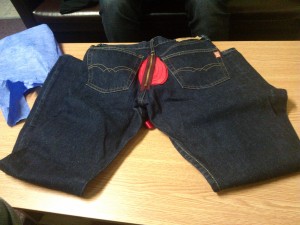 On 12 November 2013 during the Fundamental Human Rights Conference (FRC) “Combating hate crime in the EU: Giving victims a face and a voice”, the Lithuanian MP and the member of the governing coalition Petras Gražulis  has come to the LGL‘s office to deliver a personal “present” for the remaining of the LGL’ staff. He pretentiously expressed his „gratitude for LGL in the field of protecting human rights and combating homophobia in Lithuania“. Furthermore, the politician was accompanied by an unidentified cameraman, who filmed the LGL’s staff and premises without permission.

Taken into account the ongoing FRA’s Fundamental Human Rights Conference, which is organized in cooperation with the Lithuanian EU Presidency, this kind of hateful action by the MP is indicative of the prevailing homophobic, biphobic and transphobic atmosphere in the Lithuanian society. Instead of actively contributing to reducing the rates of homophobic rhetoric’s and actions in Lithuania, the Member of the Parliament has no shame in publicly harassing and inciting hatred against the local LGBT* community.

Technical Info: How to Bid

We encourage you to actively attend the bidding event on FaceBook, titled “Transform Homophobia into Human Rights – Get Exclusive Petras’ Pants!” and to place your kind offers on the event’s wall. In case you are not active on FaceBook or wish to remain anonymous, we will be more than happy to receive the bids via an e-email office@gay.lt.

On 10 December 2013, i.e. the International Human Rights Day, the one, who has placed the most generous bid on this exclusive item, will be nominated on the right to purchase the pants and to donate the proposed amount of money with the view of promoting LGBT* rights in Lithuania. The “winner” and the winning bid will be publicly announced through the organization’s website www.lgl.lt/en.

The auction is coming to an end and only one lucky bidder will get this unique pair of pants! Right now, the biggest bid we received is 250 Lt (app. 70 EUR). The auction is closing on December 10 at 2 p.m. (Lithuanian time). You still have a chance to win those pants yourself!

Enrique Anarte Lazo: LGBTQ people across the Baltics fight for their rights