On December 18th 2019, the European Parliament adopted its first text dedicated to LGBTI rights: a resolution on public discrimination and hate speech against LGBTI people.

Malin Björk, Vice-president of the LGBTI Intergroup, said: “It is simply unacceptable to see “LGBTI-free zones” spread in an EU country.”

“Adopting resolutions that discriminate against LGBTI people and their families will not make them disappear. They will marginalise further a population that is already vulnerable to discrimination and violence. This goes against all international and EU human rights law.”

The resolution takes stock of the current worrying trends observed throughout the EU, such as “attacks on LGBTI social centres in several Member States, homophobic statements and hate speech targeting LGBTI people, in particular in the context of elections, or legal instruments which might be applied to restrict media, education and other content in a manner that unduly restricts freedom of expression regarding LGBTI issues”.

Terry Reintke, co-chair of the LGBTI Intergroup, said: “With this first resolution on LGBTI rights, the EP sets the tone for the new mandate, by making its expectations from other institutions and Member States clear: to respect fundamental rights and fight against discrimination against LGBTI people, as enshrined in the Treaties and the Charter of Fundamental Rights.” 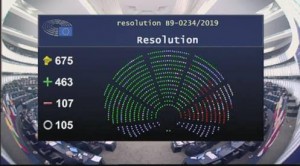 “It is about time EU institutions step up in their action against discrimination against LGBTI people, be it through awareness-raising campaigns, sharing of good practices, funding of LGBTI organisations or through article 7 procedure in cases of a “clear risk of serious breach” of EU values as is used now for Hungary and Poland.”

In the resolution, the European Parliament highlights a number of areas where action by the EU and Member States is needed, such as: