Apparently opinions were bound to polarize after LRT, the national broadcaster of Lithuania, published a social documentary portraying a parenthood journey of a married gay men couple from United Kingdom at its internet portal lrt.lt

Although plenty of people praised such a rare instance of the diversity representation, several, likely right-wing affiliated activists appealed to various institutions as well as yellow press, asking to remove “Gay Dads” content that allegedly violates the Law on the Protection of Minors Against the Detrimental Effect of Public Information. The basis of allegation was that portraying LGBT family life depicts “harmful” information for minors and promotes family concept different than that prescribed by the Constitution of the Republic of Lithuania. Earlier, the Government of the Republic of Lithuania stressed on several occasions that said law will not be applied in a way that is “discriminatory against LGBT individuals”.

A protest next to headquarters of the national broadcaster with the aim to stop it from featuring LGBT families and other related topics was initiated by a group of homophobic activists and permission was issued by the Vilnius City Municipality. 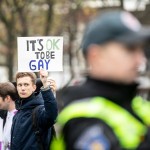 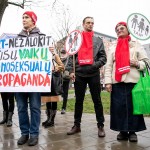 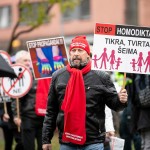 “The law designed for the “protection of minors” against the detrimental effect of public information was initiated with the intention to limit public exposure to topics on family, gender and sexuality diversity, which consequently violates the freedom of self-expression of lesbian, gay, bisexual, transgender and intersex people,” says Vladimir Simonko, LGL executive director.

“Such regulation is similar to “Anti-Gay Propaganda” laws that are active in Russia and is incompatible with the EU idea of democracy”, he added.

Since 2009 this particular Lithuanian regulation has been subjected to a widespread international criticism. In 2014 National LGBT rights organization LGL appealed to the European Commission about Lithuania’s failure to fulfill its obligations under EU law. In the official complaint prepared in collaboration with the ILGA-Europe, it was stressed that Lithuania was in violation of the law on freedom of speech and expression enshrined in the EU contract, EU Charter of Fundamental Rights and Directive on Audiovisual Media Services.

“The fact that there is a law in Lithuania being used to restrict LGBT people’s freedom of expression and speech only worsens the atmosphere of intolerance towards LGBT people in the country and legally justifies discrimination against these people. Not long ago, the country’s primary online news portals began introducing windows requiring the reader to confirm that they’re legally an adult before accessing news related to LGBT human rights. This is equating any information about LGBT people as harmful to minors. The theology teachers who compared homosexuality to cannibalism and otherwise promoted homophobia in ethics lessons should also know this law well,” said LGL’s executive director Vladimir Simonko.

“It’s shocking that the responsible institutions in Lithuania are fundamentally disinterested in repealing a discriminatory law like the Law on the Protection of Minors against the Detrimental Effect of Public Information. Ever since the beginning of Lithuania’s participation in the United Nations Universal Periodic Review and the International Civil and Political Rights Pact, we’ve been having to answer for this law to the international human rights community every year. That’s the one recommendation that Lithuania specifically refuses to accept and insists that this law isn’t used for discrimination. If those provisions aren’t going to be applied in the future, why haven’t they been repealed? As long as this law remains in effect in Lithuania, LGBT human rights will remain a footnote in human rights discourse,” Simonko stated back in 2014.

The nature of provisions of the Law on the Protection of Minors Against the Detrimental Effect of Public Information is controversial but rather abstract, formulated in way that defines harmful information as “disdaining family values” and promoting “alternative” family concepts. Although it does require urgent legislative intervention to end this question once and for all, it cannot be applied in a discriminatory way towards LGBT persons as it would conflict with the basic principles of a democratic state governed by the rule of law and contravene with the provisions laid down by legally binding Human Rights instruments as well as the Constitution of the Republic of Lithuania.

“Gay Dads” program promotes the necessary public discourse towards LGBT acceptance in Lithuania although the backlash it faced denotes the existence of deeper LGBT acceptance issues within Lithuanian society and a dangerous political narrative that seeks to manipulate rights and freedoms of the LGBT citizens. In 2019 Lithuania is one of 6 remaining European Union countries with no adequate legal recognition of same-sex partnership rights.