For many years, Norway has been at the forefront in fostering LGBT human rights. In 1981, Norway became one of the first countries in the world to enact an anti-discrimination law explicitly including sexual orientation. Same-sex marriage, adoption, and IVF/assisted insemination treatments for lesbian couples have been legal since 2009. In 2016, Norway became the fourth country in Europe to pass a law allowing the change of legal gender for transgender people solely based on self-determination.

Through the EEA Grants and Norway Grants fund, Norway has significantly contributed to reducing economic and social disparities and strengthening bilateral relations with 15 EU countries in Central and Southern Europe and the Baltics. Today we met with H. E. Karsten Klepsvik, Ambassador of Norway to Lithuania, to discuss the reasons why Norway supports LGBT human rights movements at home and abroad.

Why is it important for you to support the Lithuanian LGBT community?

“Respect and protection of the rights of the LGBT community is a reflection on the situation in terms of human rights in general. Human rights are integral: you cannot pick and choose which groups or rights to respect and protect. Norway is an advocate for strengthening human rights at home, in Europe and globally. We believe that this aspect of good governance is key to ensuring well-functioning full-fledged democracies. We seek to build our region and Europe where each person is valued and entitled to the same rights and protections. I believe strongly that protection of human rights, including LGBT rights, is imperative for our collective sustainable development and welfare of our societies.”

We greatly cherish the support from foreign Embassies and Ambassadors. Why do you think there is a lack of support for the LGBT community from local politicians and decision makers in Lithuania?

“I believe that we have seen important development in this regard in Lithuania. I could bring up the examples of the Mayor of Vilnius and the Minister of Foreign Affairs who have demonstrated their support for the LGBT community and their inclusive leadership. I would also like to commend the active Equal Opportunity Ombudsperson’s institution that promotes and raises awareness of these issues on the national stage. I think a new crop of politicians is coming to the Lithuanian politics and we will hopefully see more positive examples in the future.”

Which LGBT destination would you recommend Lithuanians to visit in Norway?

“I would like to invite all Lithuanians, LGBT and non-LGBT, to visit Norway. Now in the year of the Baltic Pride I would encourage to join Pride events in Norway. I hope we will see more and more cooperation between Norway and Lithuania in this area.”

What is your message for the local LGBT community?

“I would like to send a message of admiration and encouragement for their perseverance, bravery and sustained effort in promoting LGBT human rights. I hope that with time more openness will help advance their efforts further.”

Are you planning to join the “Baltic Pride” 2019 “March for Equality!” on June 8 in Vilnius? 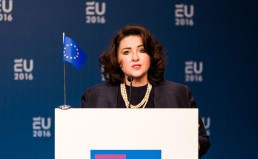 Maltese Minister for European Affairs and Equality Helena Dalli: “The Maltese population understand that all changes are being done in the spirit of individual freedoms”