Due to the upcoming “Baltic Pride” 2019 festival, we visited the Embassy of Sweden located in the very heart of Vilnius and had a meeting with the Ambassador of Sweden to Lithuania, H. E. Maria Christina Lundqvist. Ambassador kindly agreed to share the recipe for Swedish leadership in the field of human rights and tried to answer why the approaches of ensuring human rights in Lithuania and Sweden are so different.

What did you know about the human rights situation in Lithuania when you were appointed as an Ambassador of Sweden to Lithuania? Was the situation much different than you have imagined before coming to Vilnius?

“I have to admit that I didn’t know much about the situation of human rights in Lithuania, but I had heard about the “Baltic Pride” festival organized here. However, in the course of my duties I’ve become aware of the main issues and challenges faced by the human rights activists.”

In Sweden governmental support to human rights doesn’t depend on the political views of the ruling parties. What, in your opinion, is the secret of the full support for human rights in Sweden?

“Respect for human rights is the foundation of our society and part of our national identity. Our society is open and inclusive, so naturally we aim at making every citizen feel as a full-fledged member of the society. Sweden has a long-lasting tradition to protect human rights. It dates back to 1766, when Sweden passed the first law in the world of protecting the freedom of press. So, freedom, openness and social inclusion are parts of our identity.

In the beginning of this year, a newly structured government was formed in Sweden. When presenting the program of the new government, Prime Minister assured that the government will continue to strive for the progress in the sphere of LGBT human rights not only in Sweden, but in the whole world.”

Why, in your opinion, the situation in Lithuania is so different?

“I believe that it was greatly influenced by different history and traditions of our countries. Sweden has been at peace for hundreds of years, and the civil society in our country is very strong. Meanwhile, Lithuania was occupied for long decades. We are geographically close, but different historical circumstances separate us.”

Could you tell our readers a little bit more about the Swedish Embassy’s work on fostering corporate social responsibility and sustainability? 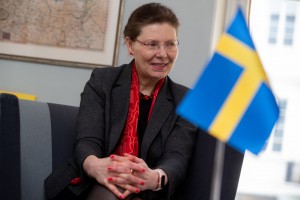 “We are performing a number of activities, which are directly related to the 2030 Agenda for Sustainable Development adopted by the United Nations. Currently it’s a priority for the Swedish government. I’ve recently participated in meetings with ministers and state secretaries of Sweden. Sustainable development is important not only for the government or civil society but also for business representatives.

Therefore, we pay a lot of attention to collaboration with the Swedish companies operating in Lithuania. It is important for Swedish people to buy products from the socially responsible companies, which do not contribute to the climate change. The consumers also avoid products, manufactured by children.

It is therefore crucial for a successful business to be responsible and to focus on sustainability and sustainable development. We have organized a few events in the Embassy, during which we presented Sweden’s aim to implement the Agenda for Sustainable Development. I’m glad, that a publication on this topic was given as a present to Lithuania to celebrate its centenary.”

What could encourage socially responsible and sustainable Swedish businesses which have their offices in Lithuania to support the human rights initiatives in Lithuania?

“Swedish companies actively contribute to various social initiatives. It is important for Swedish business sector to promote equal rights in the workplace and guarantee, that every employee is able to realize his or her full potential. In Sweden priority is given to initiatives which would enable people to be active, civil and socially responsible rather than charity initiatives. Collaboration between the civil society and the business sector is very important.”

Support for LGBT human rights is natural to Swedish consumers, but in Lithuania, you can feel the hostility when it comes to this question. Business representatives face a dilemma whether to support something that is not generally approved by consumers.

“It’s true, Swedish society is inclusive. We want everyone to have equal rights. Support for human rights and dignity, regardless of gender, sexual orientation, gender identity or other factors is very important to Swedish people.”

Sweden has always been at the forefront of ensuring equal rights to all its citizens. In your opinion, what is the secret of respect for the rights of every individual?

“Respect for human rights and social inclusion are embedded in the DNA of every Swede. We learn it at school, so it is natural to us.”

What measures are being implemented in Sweden when it comes to multiple discrimination?  Could you share the Sweden’s good practice in this sphere?

“There’s no room for discrimination in Sweden, on any grounds. We strive for realization of every individual, without discrimination.”

What social issues are currently gaining the most attention in Sweden? What strategies worked best in order to overcome it?

“Currently, the climate change is the main focus of the society, government and businesses. Fight against the climate change is important to every Swede. It became a part of our everyday life. People deeply care about the climate, the origin of food, respect to nature. So, it’s no wonder, that train travels are becoming more and more popular. During their holidays, Swedes tend to choose vehicles that are more environmentally friendly than planes.”

In March Swedish climate activist Greta Thunberg, whose school strike for climate has inspired protests around the world, was nominated for Nobel Peace Prize. In your opinion, what empowers young people in Sweden to become active citizens at an early age?

“Swedes are encouraged to be active citizens from a very early age. Schools organize discussions, school children are very well informed, and they think about their future. It’s no surprise, that Swedish youth feel responsible for the future world we’re going to live in.”

This year the Embassy of Sweden has established a Human Right’s Award. Could you tell more about how the Embassy came up with this idea? 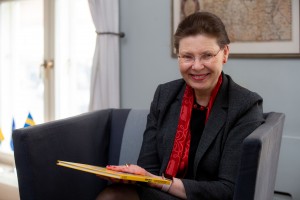 With this award, we wanted to promote active civil society and activists who work in the spheres of human rights, non-discrimination and equal rights in the whole country. We have received 27 nominations and were very surprised by the number of meaningful initiatives implemented in Lithuania.

We have established a prize for the winner – a one week visit to Sweden to exchange the good practices. All the nominees and the Nomination evaluation committee were invited to the awards ceremony. With this award, we wanted to show, how many important initiatives of civil society are being implemented in Lithuania.”

What could Lithuania learn from Sweden when it comes to consolidating support for human rights?

“I hope, that we will be able to inspire Lithuania with our own experience. Therefore, we’re organizing various seminars, during which we share the good practices. I am glad, that the “Baltic Pride” march will be attended not only by the representatives of the Swedish Embassy, but also by Swedish police, who will have a chance to share the good practices of fighting hostility towards the LGBT people.”

There is no room for discrimination in Sweden

The progress of LGBT rights in Sweden

The article was prepared as part of the project “Changes in business, public sector, society – the new standards for reducing discrimination”. The project is being implemented by the Office of the Equal Opportunities Ombudsman and partners – Public Institution “Human Rights Monitoring Institute” and the Association LGL.