At the end of 2018, the biographical film “Bohemian Rapsody” became a hit all over the world. In preparations for the Baltic Pride 2019 festival, Dexter Fletcher, director of the film “Rocketman”, based on the life of the music legend Elton John, gives an exclusive interview about why openness about sexual orientation in Hollywood has not been a taboo for a long time now and reveals behind the scenes of Rocketman’s creation.

Could you tell us more about your acquaintance with Elton John? Have you consulted with him before the film?

We have started to work on this film two years ago and I have met Elton John on several occasions. I’ve been lucky to meet him before the filming started, during the filming and after. I consulted with him in depth about the film – he came to the pre-production, looked at the costumes, sets and actors, walked around and watched rehearsals of the dancers. He always was very close to the production and his husband David Furnish is producer of the film. So Elton understands and knows everything we are doing and what we are trying to achieve with the film and he is big fan of Taron Egerton and his singing. In the film we are using close to twenty of his songs – some of them just small snippets, some of them in full and few even more extended. We have wonderful music director Giles Martin and Elton has trusted us to create new take on his music, kind of re-interpret. So right from the beginning Elton was very close to the whole production and very important. He talked about his thoughts, his ideas, but he was also very generous. He knew that we have to make it our own and make it cinematic so he gave freedom for our imagination which is very important for the movie. He gave us his blessing and the strength and the beauty to be honest. It’s real.

Is it true that there are debates whether the “Rocketman” is suitable for audiences under 14 years old? Does it have anything to do with gay content in the movie?

Not really. There is always debates about these sorts of films – R rated films, being suitable for wider audience. But never really did I believe that this film can be anything than an adult film – it was conceived and filmed as R rated film, adult film, Elton Johns life has always been adult themed story. He had his issues with drugs, alcohol abuse, prescription pills, so even beyond his sexual orientation there are always other questions about it. But it was never been to do with the gay content of the movie. Elton John is openly gay and has been gay for many many years and it is not really an issue.

Where there more open gay scenes in the “Rocketman” than in the “Bohemian Rhapsody”?

There are more openly gay scenes in the “Rocketman” than in the “Bohemian Rhapsody”. There is love scene with him and his first love, his manager John Reid, it is very important moment historically and in our film, but it is done in very tasteful and I think beautiful way and I think people will be pleasantly surprised. So no, we don’t shy away from that.

How come there is a trend of films about famous UK gay singers? Do you foresee any film about the late singer George Michael?

I don’t think that there is a trend for films about UK gay singers – it has been only two films so far – Elton John and Freddie Mercury. But I don’t think that there is an actual drive to make films particularly about gay singers. I think there are films being made about influential artist of the XX century, amazing musicians who happened to be gay, but I don’t think it is because they were gay that this fact makes them interesting. It is only one aspect of their lives, but it does not define them. It is just an element of who they are. The same like Freddie Mercury had big teeth and moustache, or Elton John wears big glasses. These are just facts. And if you are doing films about these culturally important people then the facts have be addressed, looked at and treated accordingly. So I don’t think that it is a trend particularly about gay singers.

I am sure that there is some very clever person who plans to do film about George Michael, but it is not going to be me.

What is your view on the LGBT rights in Lithuania?

LGBT rights in any country, not just Lithuania, are important. It is 2019, we are modern society, we should be about tolerance and understanding and people’s freedom to live their lives as they choose, with who they choose and how they choose. It is not for me or anyone else to say. Obviously society has its ideas about that, but we know in our hearts that we all the same. It does not matter what we choose or what we are. Life is difficult enough so we do not need to make it more difficult for each other if we could possibly avoid it.

When do you think Lithuania will catch up with the Western countries regarding implementation of LGBT human rights?

I don’t know about the Lithuanian politics so I can not comment. I hope tomorrow. I hope today that Lithuania catches up. I am sure that at some point in time it will be the case. One can only hope so. 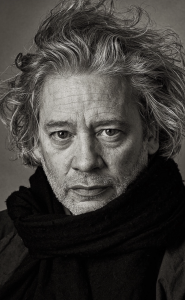 Elton John is married and has children. What is your view on same-sex partnerships, marriage and adoption? When do you think same-sex couples in Lithuania will be able to register partnerships?

People should be free to do whatever they want as long as they bring children in healthy, nurturing environment. It does not matter if they are two men, two women, one with one leg or one with one arm. It is about loving, caring and nurturing children. I think that straight people just as capable of being bad parents, as much as gay parents capable of being great parents. To be good parent is not about your sexual orientation, it is about how much you love, how much you care about your children and do what you think is best. I am sure that 99% of population of the world always try to be really good parents and do their best, weather they are gay or straight or otherwise.

Why do you think there are so little celebrities in Lithuania who are open about their sexual orientation? Why is this topic still a taboo among famous people?

That is something Lithuania has got to ask itself and not someone like me, who is an outsider. I don’t know why. I wish I did. But we all are free to choose what we say about ourselves and when we choose to say it. If people choose to keep their lives private, it is entirely up to them. If Lithuania chooses to be tolerant and open to the fact that everyone is different, then that will be a better day for everybody. Then maybe some celebrities, if there are any, who hide their sexual orientation will not feel the need to do so. But even so, people are free to choose and should be respected whatever they choose.

Cannes is a special place for Elton John: It’s where he shot the video for the hit 1983 song “I’m Still Standing” from the platinum selling record “Two Low for Zero”.