Lithuanian NGO “Christian Culture Institute”, funded by Polish Piotr Skarga fund, started to distribute homophobic leaflets urging to sign a petition to ban the upcoming Baltic Pride march to every single post box in Lithuania. The National LGBT rights organization LGL received the first messages from LGBT community members informing about the leaflets in the beginning of November. In their messages, members of the local LGBT community indicate that the content of the leaflet hurts their feelings and is incompatible with Christian values.

The content of the leaflet indicates that gay couples “traumatize children”, who “are forced to be subject to gay propaganda”; and that “Baltic Pride” march “degrades public order and morals”. Furthermore, the recipients are being asked to sign a petition to ban the “Baltic Pride” March and send it back to the “Christian Culture Institute”, which already payed for post expenses.

On 12 November, 2018 the National LGBT rights organization LGL applied to the Office of the Equal Opportunities Ombudsperson asking to evaluate the discriminative actions by NGO “Christian Culture Institute”. The Office responded that the content of the leaflet does not breach Republic of Lithuania Law on Equal Treatment and handed over LGL‘s complaint to the Prosecutor‘s Office.

The National LGBT rights organization LGL then applied to the Office of the Inspector of Journalist Ethics asking to issue an official statement denying the claims stated in the leaflet that “Baltic Pride” March is in breach of the Lithuanian Law on the Protection of Minors against the Detrimental Effect of Public Information. No such statement has been issued.

In light of these developments association LGL also applied to Lithuanian Post, urging it to stop the distribution of homophobic leaflets. Having been informed by LGBT community members that the leaflet is distributed without any subscription, LGL applied to the State Data Protection Inspectorate urging to protect the personal data of Lithuanian citizens. The State Data Protection Inspectorate claimed that the distribution of the leaflet does not breach personal data protection policy, since the leaflet is sent to every single post box and does not include recipient’s personal data.

“LGL will remain in the forefront of the struggle to stop the spread of these homophobic leaflets. Most of the claims stated in the leaflet are blatant propaganda against LGBT community in Lithuania. We will do our best to stop the hate speech being spread to Lithuanian households, even though the damage that was done is already considerable,” comment Vladimir Simonko, Executive Director of LGL.

Vilnius City Municipality Administration has issued the permit for the “Baltic Pride” march “For Equality!“ as early as April, 2018. The “Baltic Pride” 2019 march will take place on 8 June, 2019 in the central avenue of Vilnius.

The translation of the leaflet and the petition is provided below. 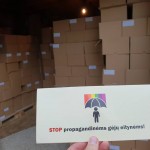 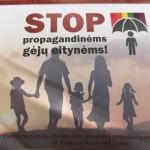 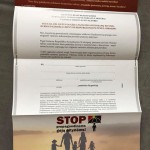 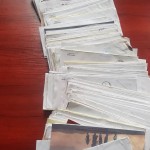 I speak to you regarding the proliferation of homosexual and transgender people propaganda and their public display, which we all are forced to observe.

Because of this propaganda, our youngest suffer most. They will suffer even more if homosexuals are allowed to be adopt. We have to protect children from this!

In June, 2019, the homosexual march in being organized in Vilnius. Their participants declare political goals to legalize a new concept of family and openly seek ‘marriage’ for same-sex couples. Our passivity helps it to happen.

Do you really want that gay couples could adopt and traumatize children? Experiences of foreign countries show after ‘getting married’ they will get such a ‘right’ as well.

I need your help in stopping this homosexual march against the family they want to change.

Already now, representatives of gay and tolerance organizations are reading stories about the love between two princesses to first class pupils in schools without parental permission and encouraging children to enjoy gay life or even try it out for themselves.

I believe that not only me, but you also do not want such things to happen, so we have to do end it together!

I appealed with my colleagues to the Vilnius Municipality and to the Office of the Inspector of Journalist Ethics, which is responsible for enforcing the above-mentioned law, to ensure that the law would be respected and that the march would not be allowed to happen. Neither the Inspector nor the municipality is  planning to take any actions. To violate the laws traumatizing children has become a norm in Lithuania.

Please sign the petition so we would stop homosexual march in places visited by children.

This way you will contribute to a better tomorrow in our country!

Thank you for your help –

Only with your help will we save the children and protect the society. Please sign the petition and send it back to me. THANK YOU!”

TEXT OF THE PETITION

“To the Seimas of the Republic of Lithuania,

to the Office of the Inspector of Journalist Ethics, and

We, the signatories of this petition, demand to ensure the enforcement of the Law on the Protection of Minors against the Negative Impact of Public Information.

According to Article 36 of the Constitution of the Republic of Lithuania, the law must restrict peaceful gatherings that violate morality and the rights of individuals, and in this case – the right of minors to protection against the negative impact of public information.

Therefore, we urge you not to allow the march that violates the above-mentioned laws to be organized by the Lithuanian Gay League in the centre of Vilnius or another place visited by minors or to cancel it altogether.”