Can you tell us more about working with the local LGBT community?

Göran: „I was one of the founding members of the Swedish LGBT Police Association. I also work in the Stockholm Police Departament’s Hate Crime Unit. We founded the LGBT Police Association in 2000 in cooperation with the Swedish LGBT organization RFSL. So far, we meet with the representatives of this organization two-three times a year. We cooperate with RFSL and organize the Stockholm Pride march.”

Is the Stockholm Pride March protected by a considerably smaller police force than the Baltic Pride march in Vilnius?

Göran: „Yes, because the Stockholm Pride march is more a party than a protest. The EuroPride march in Stockholm in 2018 included around 55 000 to 60 000 participants and 500 000 more people watched the event. Families dressed up the children with rainbow colours and celebrated the equality. 95 percent of event viewers are heterosexual. It’s like the Rio de Janeiro carnival. An unforgettable sight.”

Could you tell us more about the hate crime investigation procedure? 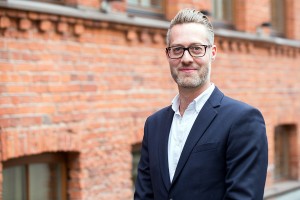 Jonas: „When we start a hate crime investigation, we try to avoid secondary victimization. An example of secondary victimization might be disrespectful interaction with the victim or the attribution of guilt to the victim. We also try to contact the victim as soon as possible. I inform the victim that I will be a crime investigator and I assure him or her that they can contact me at any time. Of course, our main objective is to prove the crime’s motive, as it is an aggravating circumstance.”

What support is provided in Stockholm to victims of hate crime based on sexual orientation and / or gender identity?

Jonas: „When we provide support for LGBT victims of hate crime, we actively cooperate with the Swedish LGBT rights organization RFSL. Organization’s representatives understand best the needs of LGBT community members and provide competent victim support services. The organization has trained staff who provide psychological and social support to victims of hate crimes. In turn, we inform the victims about RFSL provided support because they often do not know who they can contact. After receiving victims’ permission, RFSL employees contact them.”

What advise could you give to non-governmental organizations in Lithuania that work with the local LGBT community and the police?

Göran: „It is important to cooperate with local politicians and decision-makers, as they determine what kind of activities the police are supposed to do. I think that non-governmental organizations can convince local authorities that hate crimes against LGBT people are an important problem. After all, many LGBT people in Lithuania cannot openly speak about their sexual orientation and gender identity. So the police should work as professionally as possible and treat each victim the same way. However, if local authorities, like most of the public, are homophobic, efforts should be made to draw the attention of the European Union institutions to this problem. The European Union is actively supporting projects aimed at providing an effective response to the problem of hate crimes. Experts from countries where victims of hate crimes receive high quality support should also contribute to raising awareness about hate crimes in Lithuania.”

Why do you think it is important that the police force had officers who talk openly about their sexual orientation and gender identity? 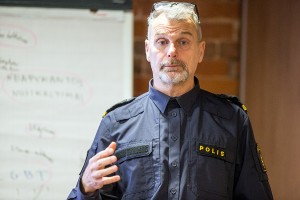 Göran: „This is the simplest way to show that we do exist. We exist in all professional fields. All police forces have homosexuals. It’s another question whether they speak openly about it. If the police officer has the opportunity to talk openly about their sexual identity in the workplace, they will work more efficiently and professionally. LGBT people are just like everyone. We are not as different as other think. Many people are afraid of what they have not encountered, so police officers’ openness in this matter would help to refute the prevailing stereotypes about LGBT people.”

Have you shared Swedish good practices in other European countries before your visit to Lithuania? If so, what did this experience give you?

Göran: „Yes, I have visited many European countries: Latvia, Lithuania, Romania, Bulgaria, Serbia. In order to share our practices in a particular country, we contacted Swedish embassies, that have contacts with various state institutions and police departments, and can help us to contact them. Most of the time we visited a country during a Pride march. These events provided an opportunity for the representatives of the responsible institutions to discuss existing problems. For example, in Bulgaria, sexual orientation is not classified as grounds for hate crimes. Bulgarian LGBT rights organizations are actively seeking that sexual orientation would be recognized as an aggravating circumstance in a hate crime. So we had the opportunity to contribute to the efforts of the local LGBT organizations to convince local authorities that hate crimes against LGBT people are an important issue.”

Göran: „Yes, we are a member of the European LGBT Police Association. I have never met any Lithuanian representatives at organization’s meetings. I would like to emphasize that it is not necessary to be a member of the LGBT community in order to seek the protection of LGBT human rights. In 2020, the Greek police are organizing a conference in Thessaloniki, where we will be discussing the problem of hate crimes against LGBT people. I am confident that the invitations to attend the conference will be sent to police departments in every European country. The participation of non-governmental LGBT rights organizations in this conference is also extremely important. The representatives of LGBT police organizations from Sweden, the Netherlands, Belgium, the United Kingdom and France will also attend the event as experts. Recently, police officers working with hate crimes against LGBT people in the United Kingdom visited Albania, Macedonia and Kosovo where they shared their practices with local police officers.” 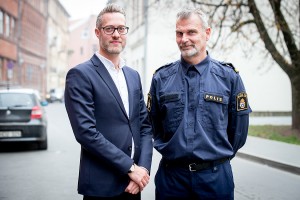 Göran: „I think it is amazing that it is possible to organize such training in  Lithuanian at all. I would like to extend the word of praise to the LGL association, which initiated these trainings. I was impressed that so many local police officers took part in the trainings. Many training participants had questions about Swedish police work with hate crimes against LGBT people. So, I think it’s a great start for a long and persistent work in resisting hate crimes. First of all, we need to seek dialogue with the local police. I am glad that they are interested in the experience of the Swedish police. I am a police office who talks openly about his homosexuality. My colleague is heterosexual but the work with hate crimes against LGBT people is equally meaningful to him.”

What are the main goals of your visit to Lithuania?

Göran: „The main goal of our visit to Lithuania is to be heard. Even if only one person listens to our words, I will feel that our actions were meaningful. It is important for local police officers to understand that all victims of crime have equal rights. Police officers must work professionally and make efforts to uncover real motives and aggravating circumstances of crimes. This is the duty of every police officer. Otherwise, you should not wonder why more and more LGBT people from Eastern Europe emigrate to Western Europe, where they can feel themselves.”

Do you have plans to participate in Baltic Pride march on June 8, 2019 in Vilnius?

Göran: „I really hope that we will have the opportunity. I promise to work on this and find out how we can make the most effective contribution to the festival’s program. Perhaps we will even have the opportunity to invite Lithuanian police officers to participate in the Stockholm Pride festival? I think it would be an excellent example in exchanging good practices.”

Jonas: „I really hope that we will have the opportunity to participate in the Baltic Pride march in Vilnius.”

Could you share impressions from the first Baltic Pride march that took place in Vilnius in 2010?

Göran: „Yes, I did participate in the first Baltic Pride march in Lithuania. I went to my chief with a request to delegate me and my colleagues to participate in the march and support the Lithuanian LGBT community. However, due to a possible threat to our health and life, we did not receive permission from the police command. So I was participated in the march not as a police officer but as a homosexual cop and a private person. We were constantly reminded that participating in the march is very dangerous. Due to the potential threat we could not leave the hotel. March participants were transported to the event location in specially ordered buses. After arriving to the event location, I saw thousands of aggressive counter-protesters on the other side of the river. After the marching, we boarded the buses again and drove to the hotel. Police officers ordered us to stay in the hotel, because a hostile crowd was gathering outside. Finally, after three or four hours we were able to leave the hotel. When I took part in the march I felt that I was doing something meaningful. If we don’t do what we need to do because of fear or potential threat – nothing will change. I am inspired by the courage of human rights activists who seek progress countries hostile to LGBT human rights. I am glad that, despite the prevailing homophobia in society, there are non-governmental organizations in Lithuania that try to change the situation. I am convinced that significant changes in LGBT human rights in Lithuania will come soon.”

This article was prepared as part of the project “Come Forward: Empowering and Supporting Victims of Anti-LGBT Hate Crimes”, which is funded by European Union’s Rights, Equality and Citizenship Programme (2014-2020).