Judging from the 2016 Baltic Pride parade in Vilnius, Lithuania has finally became a country where the LGBT* community no longer has to jump through legal hoops at the last minute when they want to throw a party. Unfortunately, neighbouring Belarus doesn’t have as much to celebrate – but this doesn’t mean that the country’s activists aren’t doing all they can for the community. Katsiaryna Borsuk, who works at the Barys Zvozskau Belarusian Human Rights House and was a member of the now defunct organization Gay Belarus, believes that although parades have been replaced by other strategies, Belarusian activists have made considerable progress. 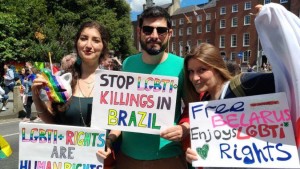 The first LGBT* pride march in Belarus took place in 1999, and the last – in 2013 (though it hasn’t been a yearly occasion.) It was after the most recent event that it became clear that public demonstrations as a form of activism were hurting the community more than they helped.

“Within a year, almost all of our members – about 100 people – had been interrogated by various law enforcement institutions, from local police to the KGB and agents of the Ministry of Internal Affairs. The end result of the constant raids and obstacles was that our members started to feel afraid. They were told that connections to Gay Belarus would have negative consequences, and that made people withdraw their membership,” Borsuk recalls, adding that along with this persecution came tremendous pressure for leaders of the movement. One of the founders of Gay Belarus, Siarhei Androsenka, was forced to emigrate to Sweden.

Out of the pride parades planned in recent years, only a few have taken place – more often, they’ve been cancelled for security reasons. Having lost nearly all its members, Gay Belarus tried again: Borsuk left her internship in the Czech Republic to try to save the fading initiative, but during a visit from the KGB, she was told in plain terms that authorities would put a stop to any action taken by Gay Belarus. Barred from working, the remaining members agreed to close the organization. In its place, the organization Identity was founded, though it was short-lived. Fatigue, stress, and fear had overcome the Gay Belarus team.

According to Borsuk, the topic of pride parades doesn’t even come up in today’s Belarusian LGBT* movement – neither society, nor the community itself supports them. “All we achieved through pride parades were things we never wanted, like repression and fear. In assembling a community, our first priority is to ensure its safety. Otherwise, it will never come together,” says the activist, who now lives in Vilnius.

As depressing as the prevailing circumstances sound, Borsuk is proud of the fact that the movement had its chance to march on the streets of Minsk. “With these parades, we were able to show society that, like it or not, we exist. We were trying to be visible, to make it into mainstream media, and the parades allowed us to do this. We were then able to start talking about how we’re not ‘promoting’ anything, that LGBT* rights aren’t anything special, just human rights,” she recalls.

DOTYK, the Belarusian initiative that emerged partially from the remains of Identity, organized its first queer culture festival in 2015. Borsuk, despite studying in Ireland at the time, was able to actively contribute. The organization, working with others such as MAKEOUT and Journalists for Tolerance, has faced no interference so far in its efforts to draw a community though art exhibitions, film screenings, workshops, safe community spaces, consultations with professionals, peer support groups, and more.

Borsuk has noticed that these strategies have strengthened the LGBT* community: the people who were going to relatively private events a few years ago are talking openly about their identity on TV today. “But the ones who were marching in parades are nowhere to be seen. They were threatened into emigrating. When you compare the results, it’s quite clear,” she observes.

“If you go on the news as a gay couple or a trans person and tell your story, nobody is going to threaten or interrogate you. A lot of articles about LGBT* people are coming up in Belarusian media, we’re getting a lot of different perspectives. Of course, society’s reaction still isn’t positive, there are negative comments everywhere, but the people sharing their perspectives are no longer being targeted by special services,” she says.

“As for parades… I think that as long as the regime refuses to tolerate any kind of public demonstration, without positive changes in the government, it’s hard to imagine them happening. Of course, if anyone wants one, let them try. But would it be worth it?”