As with any community that’s surrounded by such a life of alcohol, drugs, sex and high levels of stress, there is going to be a large amount of abuse nicotine abuse. With the recognition of this community becoming more and more popular, the public is starting to identify some of the problems that the community is facing; typically, from stereotypes and a negative attitude from the vast majority.

When people talk about the LGBTQ Community the first thing that comes to mind is a strong community that has a passion for rights to be found in some countries, more importantly; they stress a belief that you should be considered as equal no matter your sexual orientation or beliefs.

We know that vaporizers are becoming more and more popular as a substitute for nicotine addictions. Having the ability to remove other dangerous chemicals found in cigarettes, using a device that to date is proven to be safer (short term). Regardless of the health considerations that vaporizing may bring in the long run, is it worth using the substitute purely to remove the nicotine addiction, but more importantly; would this change anything? Let’s break this down.

As mentioned previously, vaporizers can be used as an alternative tool to provide nicotine to the body. The juices the vaporizers use can be smoked with a controlled amount of nicotine. Meaning you could use a vaporizer, smoking juices that contain 8mg nicotine, then gradually work your way down until you’re simply not smoking juices containing nicotine anymore. It has been done before, and many people have used vaporizers as a tool to substitute their nicotine addiction and eventually shake it.

Having a tool such as this in the LGBTQ community would be great. They could shake the nicotine addiction while still having something to feel connected to each other with. Granted, there are still health implications that will come with vaporizers.

Smoking and the LGBTQ Community 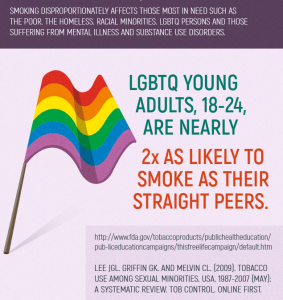 It’s important to understand what the communities do to seek tranquillity and get away from the negativity and hatred. When it comes down to it, the LGBTQ Community is not that large, granted it’s growing in size, but when it comes down to it, they’re a minuscule size compared to some people hating and throwing negativity at them. So when a community of this size receives hatred to this extent what do they do? How do they find union and support?

Why are Smoking Rates Higher in the LGBTQ Community? – It’s thought that people who suffer from Mental Health Conditions seek some relaxation or alternative to keep their mind off things. The most common things that are used is cigarettes. Proved to provide a relaxation state and a feeling of calm; that 5 minutes can make a difference to someone. The majority of LGBTQ Community members use cigarettes as their form of relaxation. It’s known that at least 30% of LGBTQ people smoke cigarettes.

Association through Health Conditions – As mentioned above, when someone suffers from a mental health condition; having a cigarette or some form of stress relief can help them a great amount. Due to the partying culture also associated with LGBTQ Community (more on this below), it’s found that cigarettes are the tool that people go to so they can relax.

The Partying Culture – Although there is a dark side of the LGBTQ community with people staying at home, refusing to socialize and meet new people. There is also an opposite side to the community, some of them have an incredibly lively social life; they can be expected to be going out almost every day of the week.

When you look at the partying culture found in the LGBTQ community and take into consideration why they’re doing it, you start to understand how much the mental conditions and opinions from others affect the community. They feel the only way to get through these dark times is to band together and fight together; when people spend so much time together, habits start to get adopted such as smoking.

Nicotine Addiction – As mentioned above, it’s no secret that smoking cigarettes will eventually lead to a nicotine addiction. When you think about some cigarettes that the LGBTQ community smokes, the amount of nicotine and other chemicals they’re pumping into their body you start to take into consideration the physical damage that is being done.

Cigarettes have been proven to be deadly in the long term and also provide some short-term issues. You can also clearly tell the LGBTQ community has no intention of stopping smoking. So is there anything that can be done as an alternative? Not an alternative to smoking, but an alternative tool to provide nicotine to their systems.

To read the whole article and the specifics regarding health concerns for the LGBTQ community click here.

For more facts and figures visit the LGBT Foundation’s website. 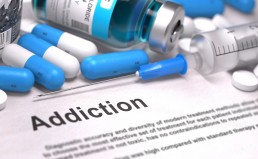 Drug and Alcohol Addiction in the LGBTQ Community