The activists who led the push to decriminalize homosexuality in Tasmania say Australia can learn a lot from their campaign.

Tasmania was the last state to decriminalize homosexuality 20 years ago today.

Rodney Croome led the push to end the criminalization of gay sex and then went on to become the national director Australian Marriage Equality.

Croome and just.equal are using the lessons from Tasmania’s campaign to send a message to Australian Prime Minister Malcolm Turnbull.

They launched a postcard campaign to send the message that ‘the sky didn’t fall in then and it won’t now’.

Featuring an illustration by Tasmanian cartoonist, Christopher Downes, the postcards will be available for free in cafes around Australia.

Marriage equality supporters should take a photo of the card against the sky and to post the photo to social media with the hashtag #TheSkyWontFallMalcolm, before posting the card through conventional post to the Prime Minister.

‘To show the sky hasn’t fallen in, we’re urging marriage equality supporters to take a photo of the postcard against the sky and post it to social media with the hashtag #TheSkyWontFallMalcolm,’ said the postcard’s creator, Richard Hale.

‘This will be a great way to highlight the fact that equality is good for everyone and has no downside.’ 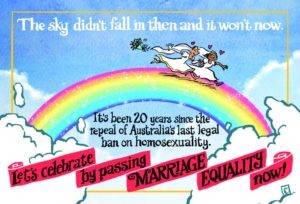 The card also highlights that decriminalisation in Tasmania was finally achieved after the then Liberal State Government was given a free vote. Marriage equality campaigners want Prime Minister Turnbull to allow a free vote in his governing party so marriage equality can pass.

‘Our new postcard campaign celebrates how far we’ve come since gay men were criminals, but also how far we have to go to ensure full equality for LGBTI people by passing marriage equality,’ Croome said.

‘The postcard highlights two key lessons the decriminalisation of homosexuality in Tasmania holds for the current marriage equality debate: gay law reform shouldn’t be a party-political issue and when reform passes the sky won’t fall in.’