On February, 2017 the national LGBT* rights organisation LGL became a member of Volonteurope, an international network promoting the values and principles of volunteering, active citizenship and social justice at local, regional, national and European level, both in the Member States of the European Union and the Council of Europe.

On this occasion Diana Rabikauskaitė, Volunteer Coordinator at LGL, shared our experience of engaging young volunteers in running the successful Pride House during Baltic Pride 2016.

LGBT* people in Lithuania continue to face discrimination and live in an unfriendly environment. The Fundamental Rights Agency’s LGBT Survey of 2012 shows that 61% of LGBT people in Lithuania feel discriminated or harassed in their everyday life. Discrimination and openly homophobic law amendments – for example the “gay propaganda” law that prevents the organisation from talking about sexuality to minors – affect LGBT youth by fostering a hostile social climate.

The national LGBT* rights organisation LGL is a non-governmental organisation in the country working in the field of LGBT* human rights. In addition to carrying out advocacy and lobbying for better conditions and laws for the Lithuanian LGBT* community, the organisation puts community building activities at the centre of its activities. Firstly, LGL seeks to support a network of LGBT* youth and secondly it empowers them to act and to stand up for their rights. 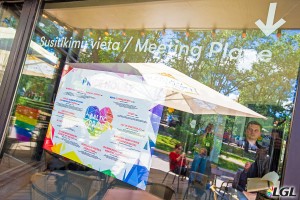 The International LGBT* festival Baltic Pride 2016, held in Vilnius from 13th to 19th June 2016, organised by LGL, was a great success in a number of ways. Not only did the event gather together more than fifty volunteers from all over the world, it hosted for the first time a volunteer-led community project – Pride House. The Pride House was inspired and fully implemented by young people, and during the days of Baltic Pride it became the place in Vilnius where culture, art and entertainment came together, with a wide variety of events.

During the Baltic Pride week the volunteers created a Rainbow InfoPoint in the cosy jazz bar that had agreed to host the Pride House. Each day they welcomed visitors, provided them with information about the festival and fundraised by selling festival merchandise to support the activities of LGL for the promotion of LGBT* rights in Lithuania.

During the Pride week the young people involved, in cooperation with LGL‘s local and international partners, organised seven workshops on LGBTQI issues. The workshops were completely youth-led as they were in charge of everything from generating ideas to organising the logistics. Some of the workshops were led by volunteers and gave them an opportunity to present their work to the wider international audience that attended the Baltic Pride events.

The workshop “Beyond gender binarism: between he and she” is a good example: during the event two of LGL’s volunteers introduced concept of neutral pronouns and presented their project around the creation of a neutral pronoun in the Lithuanian language. The event was packed, and after the workshop several interested people joined the Committee for Neutral Forms in Lithuanian Language and continued working on the proposal for the Lithuanian language committee. 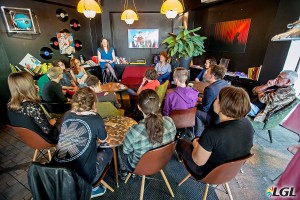 Another event that attracted many attendees was the “Bisex speed-dating”, a meeting organised by a group of bisexual activists. People had a chance to meet, talk and also listen to testimonies of Lithuanian bisexual youth. The interest in the event inspired the young people to go further and in September they organised another event called “Queer speed-dating”.

The Pride House also hosted a photo exhibition called “Five years of struggle,” showing the effects of homophobia on modern Russian society. All in all, this project not only helped to create a sense of community and togetherness, but also raised awareness of LGBT* issues and attracted allies. The young activists had a unique opportunity to engage in the LGBT* rights movement, and, with the support of LGL’s volunteer coordinator, practise their skills and implement different ideas. According to them– this was a very inspiring and empowering experience.