Earlier this month National LGBT rights organization LGL, together with a team of experts conducted a series of trainings on homophobic and transphobic hate crimes to the students of the Lithuanian Police School.  Such trainings for the Lithuanian law enforcement that would exclusively deal with the victimization of LGBT* persons have been organized for the first time. Entire course of the Police School students have attended the trainings. The rest of the series of trainings for the police is planned to continue later this fall.

The aim of the trainings is to help change pre-conceived biased attitudes towards LGBT* communities, build capacity and competence of the law enforcement in dealing with socially vulnerable groups, prevent secondary victimization. The trainings also aim to inform of the EU and national legislation on crime victims’ rights, special needs and protection. Facilitate understanding and importance of courtesy, professionalism and respect towards all of the victims of crime ensuring just and fair treatment.

As findings of the “Hate No More” survey suggests, persons who have experienced homophobic and transphobic violence or harassment are less likely to report such incidents to criminal justice system. Fair of prejudice and discriminatory treatment from the police, lack of trust in the criminal justice institutions to investigate the case, find and punish the offender, were found to be one of the main reasons for not reporting. The survey results also revealed that police officers investigating homophobic or transphobic incidents often lacked specific knowledge and skills in qualifying hate crimes as such, thus sexual orientation and gender identity of the victim was often ignored as irrelevant to the case.

We are extremely glad to receive following feedback from the future police officers who attended trainings: “Person from LGL has helped a little to change my previous negative attitude towards same-sex relationships” and “[…] all citizens must have equal rights, no matter their views or orientation”. 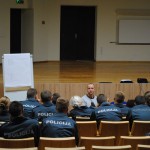 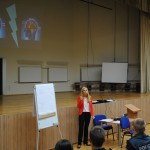 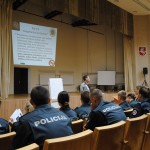 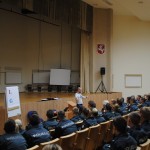 Trainings are delivered in the framework of the project „Accomodating the needs of the victims of homophobic and transphobic hate crimes – raising the competences of law-enforcement institutions“) (agreement No. JUST/2013/FRAC/AG/6163) supported by the European Commission and the „#NOH8LT: Developing Effective Response to LGBT* Hate Crimes“) (No. S-LH500-15-GR-066) project supported by the State departament of the United States. 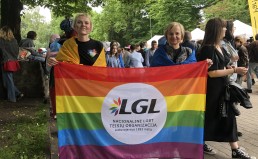